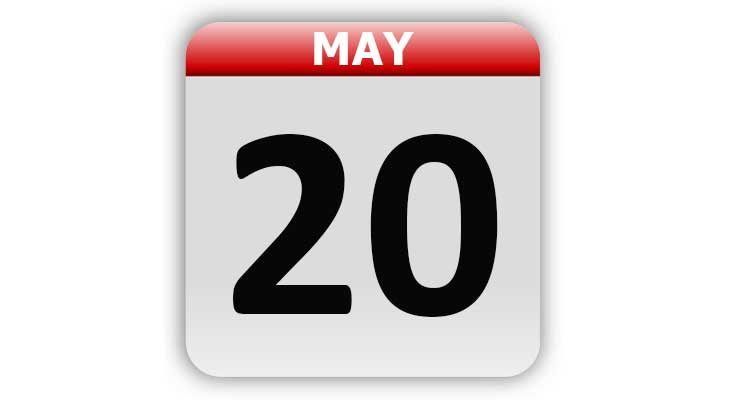 1861 – North Carolina became the eleventh state to secede from the Union.

1875 – The International Bureau of Weights and Measures was established.

1891 – Thomas Edison’s prototype kinetoscope was first shown to the public.

1899 – Taxi driver Jacob German of New York, NY, became the first driver to be arrested for speeding. The posted speed limit was 12 miles per hour.

1905 – Louis Chevrolet (who designed the Chevy for General Motors in 1911) won his first race on a cinder track in Morris Park, NY.

1916 – A Norman Rockwell painting appeared on the cover of “The Saturday Evening Post” for the first time. The painting was “Boy with a Baby Carriage”.

1926 – Congress passed the Air Commerce Act. The act gave the Department of Commerce the right to license pilots and planes.

1927 – Charles Lindbergh took off from Roosevelt Field in Long Island, NY, to cross the Atlantic non-stop for Paris aboard his airplane the “Spirit of St. Louis.” He touched down at Le Bourget Field in Paris the next day. The trip took 33 1/2 hours.

1930 – The first airplane was catapulted from a dirigible.

1932 – Amelia Earhart took off from Newfoundland to fly solo nonstop across the Atlantic Ocean. She landed in Ireland the next day to become the first woman to achieve the feat.

1939 – The first telecast over telephone wires was sent from Madison Square Garden to the NBC-TV studios at 30 Rockefeller Center in Manhattan. The event was a bicycle race.

1939 – The first regular air-passenger service across the Atlantic Ocean began with the take-off of the “Yankee Clipper” from Port Washington, NY.

1942 – The song “I’ve Got A Gal in Kalamazoo” was recorded by Glenn Miller and His Orchestra.

1969 – Peter Cetera, of the band Chicago, was beaten up by four men at a Chicago Cubs-Dodgers baseball game. The men objected to the length of his hair. Cetera underwent four hours of emergency surgery.

1980 – The submarine Nautilus was designated as a National Historic Landmark by the U.S. Secretary of the Interior.

1985 – Radio Marti, part of the Voice of America service, began broadcasting to Cuba.

1990 – The Hubble Space Telescope sent back its first photographs.

1996 – After six seasons, the final episode of “The Fresh Prince of Bel Air”, starring Will Smith, aired on NBC.

2003 – A cow in British Columbia, Canada was diagnosed with mad cow disease. As a result, the U.S. banned imports of Canadian beef, cattle and animal feed.

2007 – The Lundberg survey set a new high for gasoline prices in the United States at $3.18 per gallon.

2009 – Kris Allen was declared the winner of the eighth season of TV’s “American Idol”. Adam Lambert finished in second place.

Be a Millionaire Day