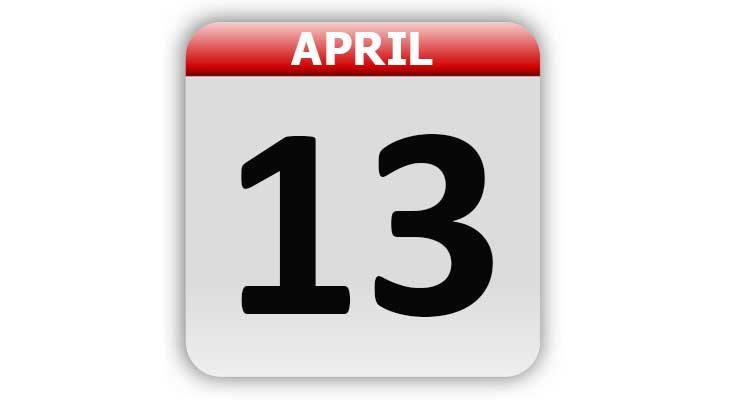 1782 – Washington, NC, was incorporated as the first town to be named for George Washington.

1796 – The first elephant to arrive in the United States came from Bengal, India.

1860 – The first mail was delivered via Pony Express when a westbound rider arrived in Sacremento, CA from St. Joseph, MO.

1861 – After 34 hours of bombardment, the Union-held Fort Sumter surrendered to Confederates.

1870 – The Metropolitan Museum of Art was founded in New York, NY.

1916 – The first hybrid, seed corn was purchased for 15 cents a bushel by Samuel Ramsay.

1933 – The first flight over Mount Everest was completed by Lord Clydesdale.

1941 – It was a warm spring day in Michigan. Temperatures reached the 80s across lower Michigan. Record highs were set in Detroit (at 87°) and Lansing (at 82°). Grand Rapids set a record high temperature when the thermometer hit 80°.

1942 – A German U-Boat was sunk off the coast of North Carolina.

1949 – Philip S. Hench and associates announced that cortizone was an effective treatment for rheumatoid arthritis.

1960 – The first navigational satellite, Transit 1-B, was launched into Earth’s orbit.

1962 – In the U.S., major steel companies rescinded announced price increases. The John F. Kennedy administration had been applying pressure against the price increases.

1963 – Baseball player Pete Rose, of the Cincinnati Reds, got his first hit in the major leagues.

1964 – Sidney Poitier became the first black actor to win an Oscar for Best Actor. It was for his role in the movie “Lilies of the Field.”

1970 – An oxygen tank aboard Apollo 13 exploded, putting the crew in great danger and causing major damage to the spacecraft while en route to the Moon. The explosion prevented a planned Moon landing.

1972 – The first player strike in the history of major league baseball ended. Players had walked off the field 13 days earlier.

1976 – The U.S. Treasury Department reintroduced the two-dollar bill as a Federal Reserve Note on Thomas Jefferson’s 233rd birthday as part of the U.S. Bicentennial celebration.

1981 – Washington Post reporter Janet Cooke received a Pulitzer Prize for her feature about an 8-year-old heroin addict named “Jimmy.” Cooke relinquished the prize two days later after admitting she had fabricated the story.

1992 – The Great Chicago Flood devastated much of central Chicago, IL.

1997 – Tiger Woods became the youngest person to win the Masters Tournament at the age of 21. He also set a record when he finished at 18 under par.

1999 – In Pontiac, MI, Jack Kervorkian was sentenced to 10 to 25 years in prison for the second-degree murder of Thomas Youk. Youk’s assisted suicide was videotaped and shown on “60 Minutes” in 1998.

2000 – Richard Gordon was charged with trying to extort $250,000 from comedian Louie Anderson in exchange for not telling the tabloid media about Anderson once asking him for sex. Gordon was held without bail pending a court hearing.

2005 – American terrorist Eric Rudolph pleaded guilty to the bombings at the 1996 Olympics, a gay club and a family planning clinic in Atlanta, GA, and an abortion clinic in Birmingham, AL. Rudolph was sentenced to four consecutive life sentences.

Tags: A Look Back, April 13, Celebrity Birthdays, Days of the Year, Today in History