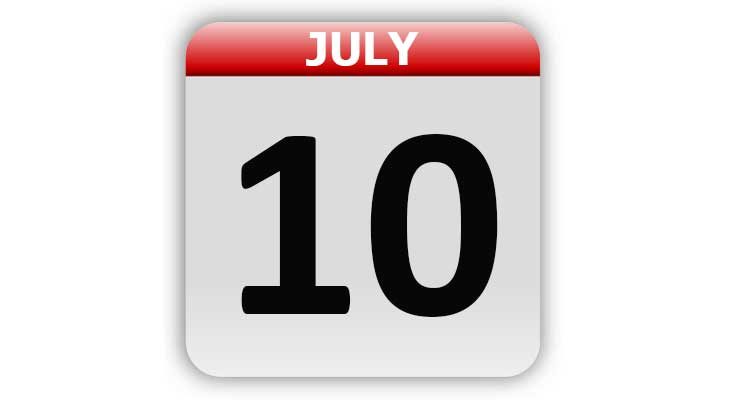 1796 – For the first time the America flag few over Michigan as U.S. Troops raised it at Monroe.

1850 – President Millard Fillmore was sworn in, a day after becoming President upon the death of Zachary Taylor.

1889 – A 70 pound meteorite crashed into Allegan, MI. It buried itself a foot and a half into the street.

1910 – W.R. Brookins became the first to fly an airplane at an altitude of one mile.

1928 – The first round trip airplane flight across Lake Michigan took place. Arthur Billings and George Frers flew from Muskegon, MI to Milwaukee, WI and back.

1938 – Howard Hughes set a new record by completing a 91 hour airplane flight around the world.

1949 – The first practical rectangular television was introduced. The TV’s picture tube measured 12″ by 16″.

1962 – Telstar launched the world’s first communications satellite into orbit.  The satellite would be used to relay TV and telephone signals between United States and Europe.

1985 – After many complaints about “New Coke”, Coca-Cola resumed selling Coke made with the old formula. It was given a new name: “Coca-Cola Classic.” The company would continue to sell “New” Coke.

1998 – The remains of Air Force First Lt. Michael Blassie were delivered to his family in St. Louis, MO. Prior to 1998, he had been placed in the “Tomb of the Unknown Solder” at Arlington National Cemetery. In 1984 his identity was confirmed with DNA testing

2015 – The Confederate flag was removed from the South Carolina Capitol grounds. It is on display at a state military museum.

2019 – The last Volkswagen Beetle rolled off the line in Puebla, Mexico. The last of 5,961 “Special Edition” cars is on exhibit at the Volkswagen Puebla Museum.

Don’t Step on a Bee Day

Tags: A Look Back, Celebrity Birthdays, Days of the Year, July 10, Today in History