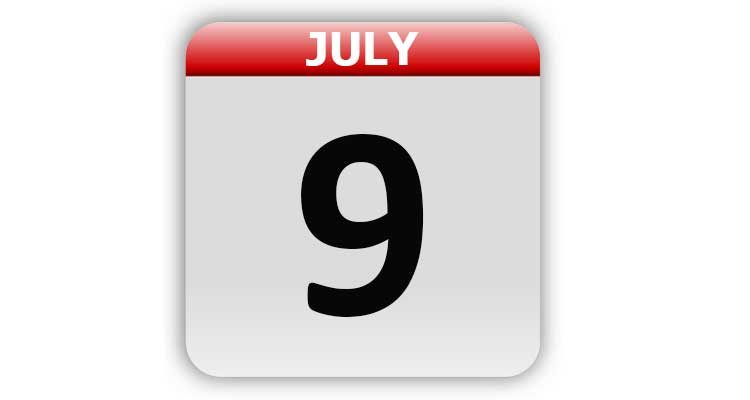 1776 – The United States Declaration of Independence was read to Gen. George Washington’s troops in New York.

1868 – The 14th Amendment to the U.S. Constitution was ratified. This amendment granted citizenship to and protect the civil liberties of recently freed slaves. It prohibits states from denying or abridging the privileges or immunities of citizens of the United States, depriving any person of his life, liberty, or property without due process of law, or denying to any person within their jurisdiction the equal protection of the laws.

1922 – Johnny Weissmuller (who later played “Tarzan”) became the first person to swim the 100 meters freestyle in less than a minute.

1937 – The silent film archives of Fox Film Corporation were destroyed by a vault fire.

1955 – The song “Rock Around the Clock” by Bill Haley & His Comets hit #1 on Billboard’s Pop charts, marking the first time a rock and roll recording hit #1

1956 – A TV show called “Bandstand”, hosted by Dick Clark debuted in Philadelphia, PA. The show later moved to ABC and the name was changed to “American Bandstand”.

1968 – The first indoor All-Star baseball game was played at the Astrodome in Houston, TX.

1981 – The Nintendo video game “Donkey Kong” was released. (It was also the debut of “Mario”, Nintendo’s future mascot.)

1977 – Elvis Costello quit his day job as a computer operator at a cosmetic factory.

1983 – The Police’s single “Every Breath You Take” began a nine-week stretch at the #1 spot on the Pop Chart.

1995 – The Grateful Dead gave their last concert with Jerry Garcia at Chicago’s Soldier Field. Garcia died the following month of a heart attack.

1997 – Mike Tyson was banned from boxing for 15 months and fined $3 million for biting the ear of Evander Holyfield during a match.

1999 – The movie “American Pie” premiered in theaters. The film was written by Adam Herz, who grew up in East Grand Rapids, MI.

2003 – The first Pirates of the Caribbean movie, “The Curse of the Black Pearl”, premiered in theaters.

2004 – The movie “Anchorman”, starring Will Ferrell, premiered in theaters.

2005 – Skateboarder Danny Way rode down a large ramp and jumped across the Great Wall of China. In doing so, he became the first person to ever clear the wall without the aid of a motor.

2010 – The animated movie “Despicable Me” was released in theaters.

Tags: A Look Back, Celebrity Birthdays, Days of the Year, July 9, Today in History