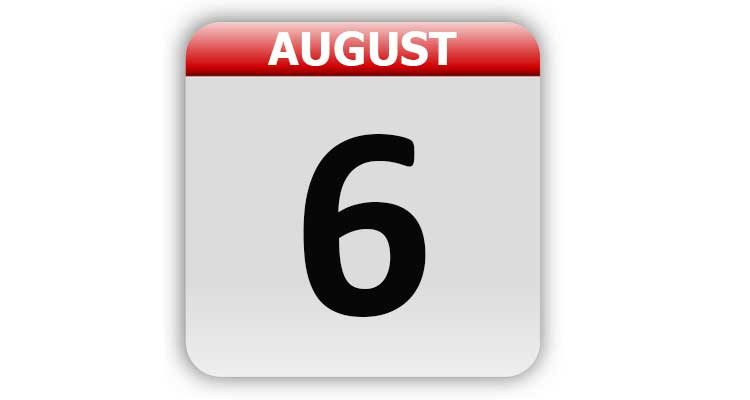 1787 – At the Constitutional Convention, in Philadelphia, PA, debate began on the first draft of the U.S. Constitution.

1890 – At Auburn Prison in New York, NY, murderer William Kemmler became the first person to be executed by electric chair.

1926 – At the age of 19, Gertrude Ederle became the first American woman to swim the English Channel. The swim took 14-1/2 hours. She was sometimes referred to a the “Queen of the Waves”.

1945 – The American B-29 bomber, known as the Enola Gay, dropped the first atomic bomb on an inhabited area. The bomb was dropped over the center of Hiroshima, Japan. The bomb killed an estimated 140,000 people.

1965 – The Voting Rights Act was signed by President Lyndon B. Johnson.

1981 – Firefighters in Indianapolis, IN, answered a false alarm. When they returned to their station, it was ablaze due to a grease fire.

1986 – William J. Schroeder died. He lived 620 days with the Jarvik-7 man-made heart. He was the world’s longest surviving recipient of a permanent artificial heart.

1991 – Tim Berners-Lee released files describing his idea for the World Wide Web. WWW debuted as a publicly available service on the internet.

1993 – The U.S. Senate confirmed Louis Freeh to be the director of the FBI.

1996 – NASA announced that the ALH 84001 meteorite, thought to originate from Mars, contained evidence of primitive life-forms.

1997 – Apple Computer and Microsoft agreed to share technology in a deal giving Microsoft a stake in Apple’s survival.

1998 – Monica Lewinsky testified before a grand jury about her affair with President Bill Clinton. She spent 8-1/2 hours testifying.

2007 – The Crandall Canyon Mine in Huntington, Utah collapsed, trapping six miners. The mine’s operator says that the collapse was due to an earthquake. Despite frantic efforts, the miners were never rescued. In late November, the mine was permanently closed, entombing the miners’ remains.

2009 – Bronx, NY native Sonia Sotomayor was sworn in to become the third woman — and first Latina — to sit on the United States Supreme Court.

2012 – NASA’s Curiosity rover landed on the surface of Mars.

Tags: A Look Back, August 6, Celebrity Birthdays, Days of the Year, Today in History