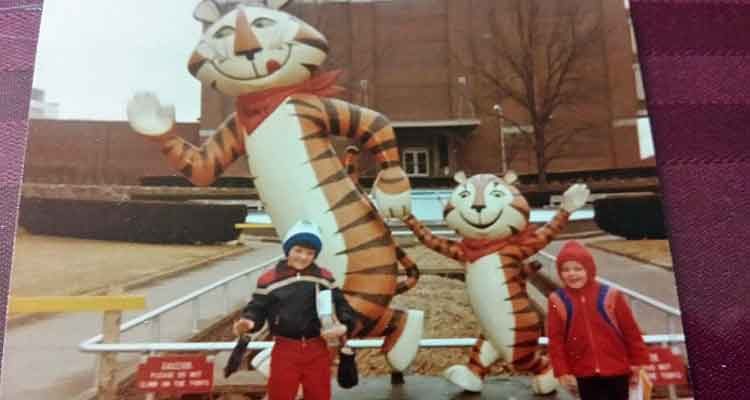 As a child, I remember loading into the family station wagon and heading south to Battle Creek, MI for the day. One of the highlights would be the tour of the Kellogg’s Cereal Factory.

I went on this tour probably 4 or 5 times growing up. Standing in line with all of the other people joining you on the tour. Wearing the paper hat to cover your hair. I recall how cool it was to actually be inside the production facility where they were making Corn Flakes! What kid wouldn’t be mesmerized by the steady stream of empty boxes, sailing by on a conveyor belt at high speed, to be fill with our favorite breakfast food.

The tour took about an hour. At the end of the trip through the plant, each visitor was given a postcard or two, and a bundle of the individual servings of a variety of Kellogg’s cereals. A single service size box of your favorite cereal was always a fun treat for the drive home — minus the milk of course.

On April 11th, 1986, Kellogg’s stopped giving tours of its breakfast-food plant. The reason for the end of the 80 year tradition was said the fear that company secrets were at risk due to spies from other cereal companies.

Several people on Facebook commented about their visits to the factory…

Bob commented, “They were fun, and we received a six or eight pack snack pack with them, I remember the free smells.”

Tracy remarked, “I remember that tour and the eight pack you got at the end, and the warm corn flakes we got to taste…”

Gayle posted, “I remember going on that tour when i was in elementary school. at the end of the tour they gave us ice cream with fruit loops on it.”

After Kellogg’s stopped doing the tours of the actual plants, they opened up a Cereal City exhibit in 1997. Cereal City was a museum and was designed to look like a turn-of-the-20th-century industrial factory. Part of it was set up to simulate part of the factory tour, but it was never quite the same. After years of a declining number of visitors, Cereal City closed in 2007.

I think the other cereal company in Battle Creek at the time — Post — also did tours at the time, but their tour never took you into the production facility and was never as interesting as the Kellogg’s tour. I only went on the Post tour one time.

I can still imagine the smell of the cereal being manufactured that fill our nostrils while on the tour at Kellogg’s. I miss those tours!

Special thanks to Heidi Allen for providing the main picture at the top of this post. She is in the picture with her brother Andy Stokes (on the left). I don’t think pictures were allowed on the tour, but afterwards many families took pictures at the Tony the Tiger and Tony Jr. statue outside the plant.

Here is a classic Kellogg’s commercial featuring Tony the Tiger and his son Tony Jr.

Here is more on the history of Kellogg’s.