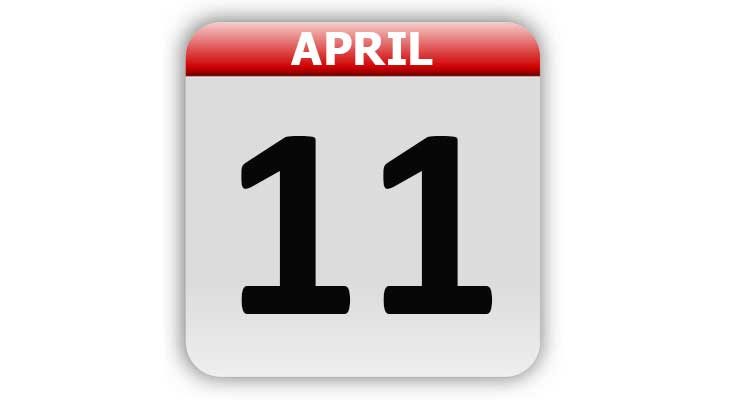 1783 – After receiving a copy of the provisional treaty on March 13, the U.S. Congress proclaimed a formal end to hostilities with Great Britain.

1803 – A twin-screw propeller steamboat was patented by John Stevens.

1921 – Iowa became the first state to impose a tax on cigarettes.

1921 – The first live sports event on radio took place this day on KDKA Radio. The event was a boxing match between Johnny Ray and Johnny Dundee.

1901 – Construction on the Empire State Building was completed. The building was dedicated and opened on May 1, 1931.

1936 – The Detroit Red Wings won the Stanley Cup for the first time.

1947 – Jackie Robinson became the first black player in major-league history. He played in an exhibition game for the Brooklyn Dodgers.

1952 – The movie “Singin’ in the Rain”, starring Gene Kelly, Donald O’Connor, and Debbie Reynolds, premiered in theaters in the United States.

1965 – The Palm Sunday tornado outbreak. Fifty-one tornadoes hit in six Midwestern states, killing 256 people. One of the tornadoes hit Comstock Park and Rockford, MI. It was the second worst tornado outbreak in the United States, striking from Iowa to Ohio. The worst damage was near the Indiana state line. Five people were killed in the tornado that went through Comstock Park.

1968 – President Lyndon B. Johnson signed the 1968 Civil Rights Act, prohibiting discrimination in the sale, rental, and financing of housing.

1970 – Apollo 13 blasted off on a mission to the moon that was disrupted when an explosion crippled the spacecraft. The astronauts managed to return safely.

1981 – President Ronald Reagan returned to the White House from the hospital after recovering from an assassination attempt on March 30.

1985 – Scientists in Hawaii measured the distance between the earth and moon within one inch.

1986 – Kellogg’s stopped giving tours of its breakfast-food plant in Battle Creek, MI. The reason for the end of the 80 year tradition was said to be that company secrets were at risk due to spies from other cereal companies. Read more about the tours here.

1996 – Seven-year-old Jessica Dubroff was killed with her father and flight instructor when her plane crashed after takeoff from Cheyenne, Wyoming. Jessica had hoped to become the youngest person to fly cross-country.

2000 – At Comerica Park in Detroit, the Tigers played their first home opener in their new ballpark. They beat the Seattle Mariners 5-2 in front of a crowd of 39,168 fans.

2001 – Ending a tense 11 day standoff, China agreed to free the 24 crew members of an American spy plane after President George W. Bush apologized for the death of a Chinese fighter pilot whose plane had collided with the American aircraft.

2007 – Apple announced that the iTunes Store had sold more than two million movies.

2007 – MSNBC announced that it would stop simulcasting “Imus in the Morning” in the wake of controversial, racially charged comments made by Don Imus about the Rutgers University women’s basketball team. His on air “nappy headed hos” comment got him fired from his radio gig a day later.

2009 – Susan Boyle became an overnight sensation after her performance of “I Dreamed a Dream” from Les Misérables on the British TV show “Britain’s Got Talent”.

Tags: A Look Back, April 11, Celebrity Birthdays, Days of the Year, Today in History