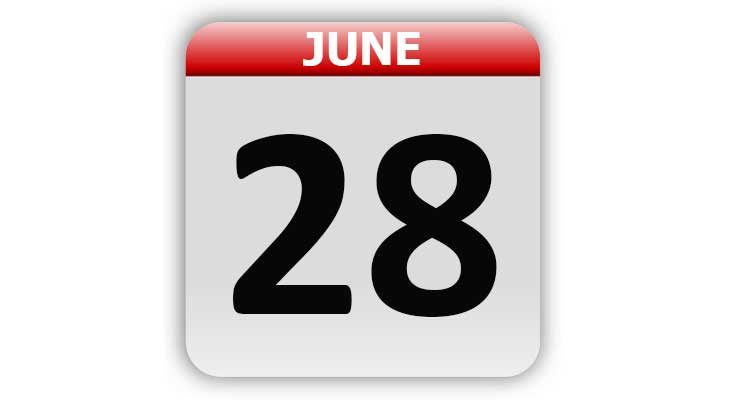 1778 – Mary “Molly Pitcher” Hays McCauley, wife of an American artilleryman, carried water to the soldiers during the Battle of Monmouth and, supposedly, took her husband’s place at his gun after he was overcome with heat.

1820 – Colonel Robert Gibbon ate a tomato on the steps of a New Jersey courthouse to prove that tomatoes were not poisonous.

1902 – The U.S. Congress passed the Spooner Act, it authorized a canal to be built across the Isthmus of Panama.

1919 – The Treaty of Versailles was signed ending World War I exactly five years after it began. The treaty also established the League of Nations.

1926 – Mercedes-Benz was formed by Gottlieb Daimler and Karl Benz merging their two companies.

1953 – Workers at a Chevrolet plant in Flint, MI, assembled the first Corvette. The two-seater sports car would become an American favorite.

1964 – Malcolm X founded the Organization for Afro American Unity to seek independence for blacks in the Western Hemisphere.

1965 – The first commercial satellite began communications service. It was Early Bird (Intelsat I).

1972 – President Richard Nixon announced that no new draftees would be sent to Vietnam.

1980 – Biscayne National Park off the coast of Florida was established.

1996 – The film remake of “The Nutty Professor”, starring Eddie Murphy in many of the roles, debuted in theaters.

1998 – The Cincinnati Enquirer apologized to Chiquita banana company and retracted their stories that questioned company’s business practices. They also agreed to pay more than $10 million to settle legal claims.

2000 – Six-year-old Elián González, the Cuban boy who became the subject of a huge political and legal battle in Florida, was sent back to Cuba.

2001 – The U.S. Court of Appeals for the District of Columbia Circuit set aside an order that would break up Microsoft for antitrust violations. However, the judges did agree that the company was in violation of antitrust laws.

2005 – The final design for the “Freedom Tower” (One World Trade Center) was formally unveiled.

2007 – The American bald eagle was removed from the endangered species list.

2010 – The Supreme Court ruled 5-4 that Americans have the right to own a gun for self-defense anywhere they live.

Tags: A Look Back, Celebrity Birthdays, Days of the Year, June 28, Today in History