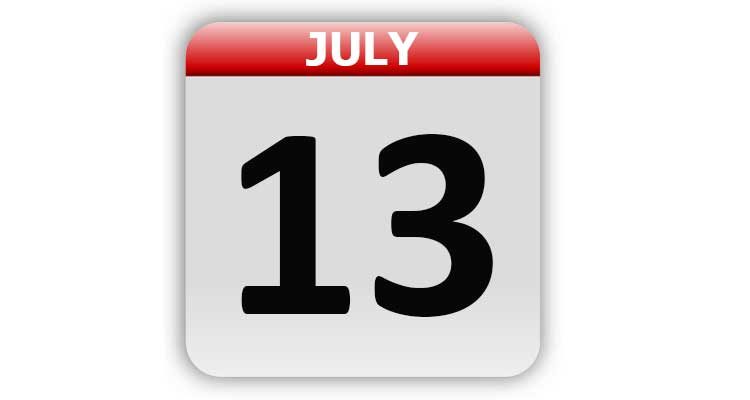 1832 – Henry Schoolcraft discovered the source of the Mississippi River in Minnesota.

1836 – John Ruggles received patent #1 from the U.S. Patent Office. It was for a traction wheel used in locomotive steam engines. There were 9,957 previous patents, but they were not numbered.

1919 – The British airship R34 landed in Norfolk, England, completing the first airship return journey across the Atlantic in 182 hours of flight.

1923 – The Hollywood Sign was officially dedicated in the hills above Hollywood, California. The sign originally read “Hollywoodland” but the last four letters were dropped when it was renovated in 1949.

1973 – Alexander Butterfield revealed the existence of the “Nixon tapes” to the special Senate Committee investigating the Watergate break in.

1977 – New York, NY experienced a 24-hour blackout, that was caused by lightning strikes, that lead to widespread fires and looting.

1982 – The All-Star Game was played outside the United States for the first time. They played in Montreal, Canada.

1984 – Kermit and Miss Piggy took over the Big Apple…the movie “The Muppets Take Manhattan” premiered in theaters. This was the first appearance for the Muppet Babies.

1984 – In Arkansas, Terry Wallis was injured in a car accident and was left comatose. He came out of the coma in June, 2003.

1985 – Vice President George Bush became the Acting President for the day when President Ronald Reagan underwent surgery to remove polyps from his colon.

1985 – Live-Aid concerts took place in Philadelphia, PA, and London, England, as well as other venues such as Sydney, Australia and Moscow, Russia.

1998 – “Image of an Assassination” went on sale. The video documentary is about Abraham Zapruder’s home video of President Kennedy’s assassination in Dallas in November of 1963.

1994 – Tonya Harding’s ex-husband, Jeff Gillooly, was sentenced (in Portland, OR) to a two-year prison term for his role in the attack on skater Nancy Kerrigan.

2013 – George Zimmerman was found not guilty in the shooting of Trayvon Martin.

Tags: A Look Back, Celebrity Birthdays, Days of the Year, July 13, Today in History