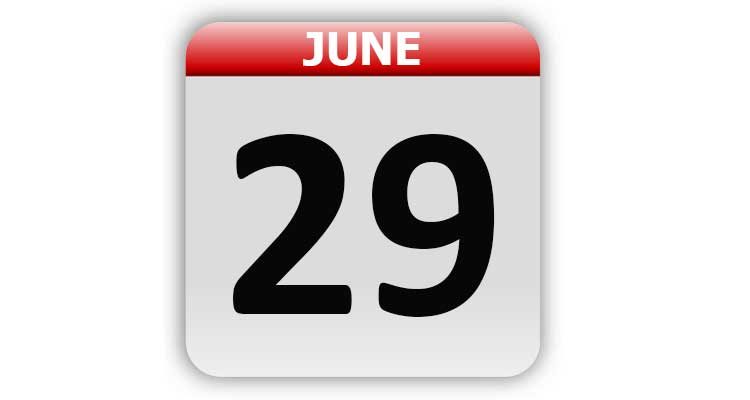 1804 – Privates John Collins and Hugh Hall, of the Lewis and Clark Expedition, were found guilty by a court-martial consisting of members of the Corps of Discovery for getting drunk on duty. Collins received 100 lashes on his back and Hall received 50.

1860 – The first iron-pile lighthouse was completed at Minot’s Ledge, MA.

1889 – Hyde Park and several other Illinois townships voted to be annexed by Chicago, forming the largest U.S. city in area and second largest in population.

1897 – The Chicago Cubs scored 36 runs in a game against Louisville, setting a record for runs scored by a team in a single game.

1925 – Marvin Pipkin filed for a patent for the frosted electric light bulb.

1927 – “The Bird of Paradise”, a U.S. Army Air Corps Fokker tri-motor, completed the first transpacific flight, from the mainland United States to Hawaii.

1953 – The Federal Highway Act authorized the construction of 42,500 miles of interstate highway from coast to coast.

1972 – The U.S. Supreme Court ruled that the death penalty could constitute “cruel and unusual punishment”. The ruling prompted states to revise their capital punishment laws.

1975 – Steve Wozniak tested his first prototype of the Apple I computer.

1995 – George Foreman was stripped of his IBF heavyweight title for refusing a rematch with German boxer Axel Schulz.

1995 – The Space Shuttle Atlantis and the Russian space station Mir docked, forming the largest man-made satellite ever to orbit the Earth.

1998 – Katie Couric of TV’s “Today” Show signed a four-year contract that put her in the same salary league as Tom Brokaw and Dan Rather — a reported $7 million annually.

1998 – With negotiations on a new labor agreement at a standstill, the National Basketball Association (NBA) announced that a lockout would be imposed at midnight.

2005 – The Steven Spielberg adaptation of the H.G. Wells novel, “The War of the Worlds”, debuted in theaters.

2011 – The state of Nevada passed the first law that permitted the operation of autonomous cars on public roads. The law went into effect on March 1, 2012 and did not permit the use of the cars to the general public. Google received the first self-driving vehicle license in the U.S. on May 4, 2012 in Nevada.

2012 – The movie “Magic Mike”, starring Channing Tatum, premiered in theaters. The movie made $167 million and only cost $7 million to make.

International Day of the Tropics

Tags: A Look Back, Celebrity Birthdays, Days of the Year, June 29, Today in History