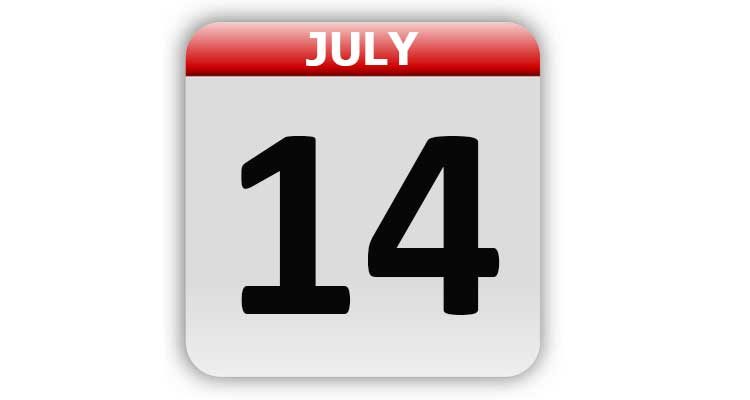 1798 – Congress passed the Sedition Act. This act made it a federal crime to write, publish, or utter false or malicious statements about the United States government.

1853 – The opening of the first major U.S. World’s Fair, the Exhibition of the Industry of All Nations in New York, NY.

1868 – Alvin J. Fellows received a patent for the tape measure.

1874 – The Chicago Fire burned down 47 acres of the city, destroying 812 buildings, killing 20, and resulting in the fire insurance industry demanding municipal reforms from Chicago’s city council.

1881 – Billy the Kid was shot and killed by Pat Garrett outside Fort Sumner.

1911 – Harry N. Atwood, an exhibition pilot for the Wright brothers, landed an airplane on the South Lawn of the White House. He was later awarded a Gold medal from President William Howard Taft for the feat.

1914 – The patent for liquid rocket fuel was given to Robert H. Goddard.

1946 – Dr. Benjamin Spock’s “The Common Sense Book of Baby and Child Care” was first published. It became America’s second most popular book of the 20th Century (after The Bible).

1951 – The first sports event to be shown in color, on CBS-TV, was the Molly Pitcher Handicap at Oceanport, NJ.

1960 – Jane Goodall arrived at the Gombe Stream Reserve in present-day Tanzania to begin her famous study of chimpanzees in the wild.

1965 – The Mariner 4 flyby of Mars took the first close-up photos of another planet.

1981 – The All-Star Game was postponed because of a 33-day-old baseball players strike. The game was held on August 9.

1987 – Steve Miller got a star on the Hollywood Walk of Fame.

1991 – Demi Moore appeared in body paint but otherwise nude and extremely pregnant on the cover of “Vanity Fair” magazine.

2001 – Beijing was awarded the 2008 Olympics. It was the first time that the China had been awarded the games.

2003 – Jerry Springer officially filed papers to run for the U.S. Senate from Ohio.

2018 – On what would have been President Gerald R. Ford’s 105th birthday, a statue of First Lady Betty Ford was unveiled at the Gerald R. Ford Presidential Museum in Grand Rapids, MI. The statue shows Mrs. Ford in a dance-like pose. The statue was sculpted by local artist J. Brett Grill.

2020 – Wearing a mask to fight COVID-19 was required in the state of Michigan in indoor public places and outdoor crowded spaces. Businesses were told they must refuse entry or service to those who do not wear a face covering (with limited exceptions).

Tags: A Look Back, Celebrity Birthdays, Days of the Year, July 14, Today in History