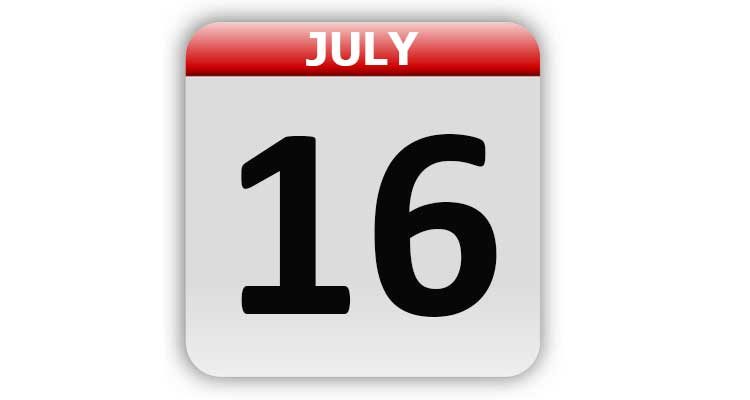 1790 – The District of Columbia (Washington, DC) was established as the permanent seat of the United States Government.

1912 – The airplane torpedo was patented by Bradley A. Fiske.

1926 – “National Geographic” magazine published the first underwater color photographs. The pictures had been taken near the Florida Keys.

1935 – The first parking meters to be used in the United States were installed in Oklahoma City, OK.

1941 – Joe DiMaggio hit safely for the 56th consecutive game — a streak that still stands as a Major League Baseball record.

1945 – The United States detonated the first atomic bomb in a test at Alamogordo, NM.

1956 – Ringling Bros. and Barnum and Bailey Circus closed its very last “Big Tent” show in Pittsburgh, PA. Due to changing economics, all subsequent circus shows would be held in arenas.

1964 – Little League Baseball Incorporated was granted a Federal Charter unanimously by the United States Senate and House of Representatives.

1969 – The first manned mission to the surface of the moon began when Apollo 11 blasted off from Cape Kennedy, FL.

1981 – After 23 years with the name Datsun, executives changed the name of their cars to Nissan.

1985 – The All-Star Game, televised on NBC-TV, was the first program broadcast in stereo by a TV network.

1999 – John F. Kennedy, Jr. died, along with his wife and sister-in-law, when his plane crashed into the Atlantic Ocean off the coast of Martha’s Vineyard.

2004 – Millennium Park in Chicago, IL, is opened to the public by Mayor Richard M. Daley.

2004 – Martha Stewart was sentenced to five months in prison and fined $30,000 after being found guilty of four counts of obstruction of justice and lying to federal investigators.

2005 – J.K. Rowling’s book “Harry Potter and the Half-Blood Prince” was released. It was the sixth in the Harry Potter series. On the very first day, the book sold 6.9 million copies.

2009 – In Chicago, IL, the Sears Tower was renamed Willis Tower.

Tags: A Look Back, Celebrity Birthdays, Days of the Year, July 16, Today in History