We are another day closer to the weekend. The weather is looking good for Saturday, Maybe some thunderstorms on Sunday. Here are my “Random Thoughts” for Thursday…

It’s fun to look back and see how our state of Michigan was promoted in the past.

I found an old travel video that was produced to encourage tourism in the “mitten state”.

You can see a few other old tourism videos on my WFGR blog here. There are also some of the Pure Michigan TV commercials, narrated by Tim Allen. Some of those were so good.

Apparently actor Arnold Schwarzenegger has a couple of pets…a donkey and a dog. It looks like Dutch and Lulu are going to become friends…

Dutch and Lulu update: this is the beginning of a fantastic friendship. pic.twitter.com/VWca6E4jEl

It looks like the donkey is in the house! Imagine cleaning up after that!

And Kelly Osbourne brings her pet to work…

I’ve said it before and I’ll say it again…Hollywood has run out of ideas.

The trend the last couple of years is to take something old and just redo it.

Now, Sony is working on a sequel reboot of the ’80s TV sitcom “Who’s the Boss”. It looks like original stars Tony Danza and Alyssa Milano are on board.

A year ago, Tony Danza shot down the idea of a reboot, saying he wasn’t a fan of reboots…

Apparently the money is good and he’s changed his mind. 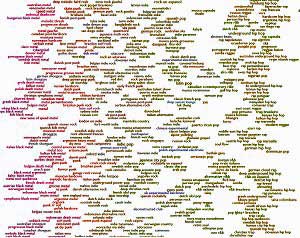 Have you ever thought about all the different types of music genres there are?

Someone has put together a website with a list of many of these musical styles. Some things you probably never even thought about. For example, classic russian rock, finnish rockabilly, and deep happy hardcore, There is even an “Grand Rapids Indie” genre.

The website EveryNoise.com has complied a list of these genres and supplied audio clip samples for you to listen to. If you click on the genre it opens up and even bigger list. I could spend hours — no maybe days — scrolling around on this site. If you are a music lover, you definitely need to check it out.

Do you have sloppy penmanship? Illegible handwriting has a name. Do you know what it is called?

In the past A&W restaurants offered up a free root beer float to celebrate, but it doesn’t look like they are doing that this year.

On this date in 1981, Firefighters in Indianapolis, IN, answered a false alarm. When they returned to their station, it was ablaze due to a grease fire.

Find out what else has happened on August 6th.

The answer to the question above: Illegible handwriting is called “griffonage”.