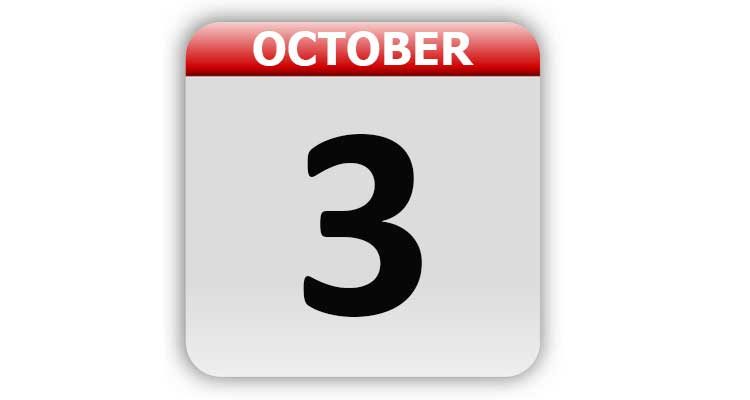 1849 – Author/poet Edgar Allan Poe was found delirious in a gutter in Baltimore, MD, under mysterious circumstances. It was the last time he was seen in public before his death.

1863 – President Abraham Lincoln declared that the last Thursday of November would be recognized as Thanksgiving Day.

1887 – Terrible storms hit the Great Lakes. Several ships were lost including “The City of Green Bay”, “The Havana”, and “The California”.

1901 – The Victor Talking Machine Company was incorporated. After a merger with Radio Corporation of America the company became RCA-Victor.

1942 – The Office of Economic Stabilization was established by President Franklin D. Roosevelt. He also authorized controls on wages, salaries, rents, and farm prices.

1962 – Sigma 7 was launched from Cape Canaveral, with astronaut Wally Shirra on board for a six orbit, nine hour flight.

1974 – Frank Robinson took over the management position of the Cleveland Indians baseball team. He was the first black manager in major league baseball.

1980 – The movie “Somewhere in Time” was released by Universal Studios Entertainment. It was filmed on Michigan’s Mackinac Island at the famous Grand Hotel.

1988 – The Space Shuttle Discovery, on the first mission since the Challenger disaster, landed safely after four days in space.

1989 – Art Shell became the first African-American head coach in the modern NFL when he took over the Los Angeles Raiders.

1990 – The Berlin Wall was dismantled eleven months after the borders between East and West Germany were dissolved after 45 years of division.

1995 – O.J. Simpson was found not guilty of the murders of his ex-wife Nicole Brown Simpson and her friend Ronald Goldman.

2000 – Mark David Chapman was denied parole after a 50-minute meeting with the parole board at Attica State Prison in New York, NY. Chapman had been sentenced to life for the murder of John Lennon on December 8, 1980.

2001 – On a Greyhound bus near Manchester, TN, passenger Damir Igric slashed the driver’s throat, causing a wreck that killed six and injures 34 others. The driver survived.

2003 – On his birthday, Ray Horn, of “Siegfried & Roy,” was attacked by a tiger during a performance. Roy survived the attack after being dragged offstage. The tiger, a 7-year-old male named Montecore, was debuting in his first show.

2005 – Jim Leyland was introduced as the new manager for the Detroit Tigers.

2008 – The Emergency Economic Stabilization Act of 2008 for the U.S. financial system was signed by President George W. Bush.

Tags: A Look Back, Celebrity Birthdays, Days of the Year, October 3, Today in History