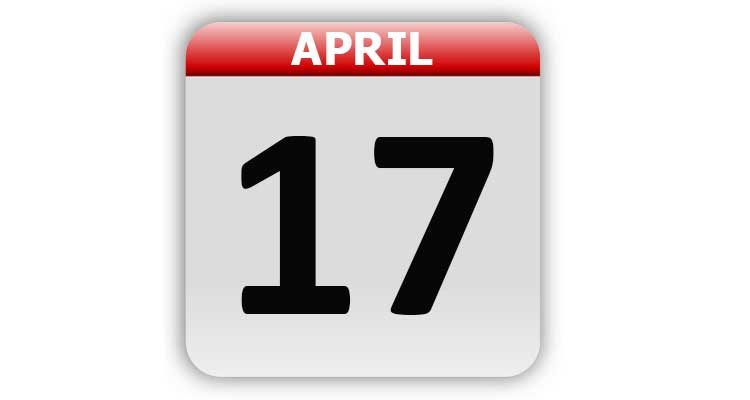 1629 – Horses were first imported into the colonies by the American Massachusetts Bay Colony.

1704 – John Campbell published what would eventually become the first successful American newspaper. It was known as the Boston “News-Letter.”

1861 – Virginia became the eighth state to secede from the Union.

1865 – Mary Surratt was arrested as a conspirator in the President Abraham Lincoln assassination.

1907 – The Ellis Island immigration center processed 11,747 people…more than on any other day.

1917 – A bill in Congress to establish Daylight Saving Time was defeated. It was passed a couple of months later.

1941 – The office of Price Administration was established in the U.S. to handle rationing.

1961 – About 1,400 U.S.-supported Cuban exiles invaded Cuba at the Bay of Pigs in an attempt to overthrow Fidel Castro. It was an unsuccessful attack.

1964 – Jerrie Mock became first woman to fly an airplane solo around the world.

1964 – The FBI lab reported that it could not determine the lyrics to “Louie Louie.”

1967 – The U.S. Supreme Court barred Muhammad Ali’s request to be blocked from induction into the U.S. Army.

1970 – Apollo 13 returned to Earth safely after an on-board accident with an oxygen tank.

1973 – George Lucas began writing the treatment for “The Star Wars”.

1996 – Erik and Lyle Menendez were sentenced to life in prison without parole for killing their parents.

2002 – The television show “Ally McBeal” went off the air after five seasons.

2014 – NASA’s Kepler space telescope confirmed the discovery of the first Earth-size planet in the habitable zone of another star.

Tags: A Look Back, April 17, Celebrity Birthdays, Days of the Year, Today in History