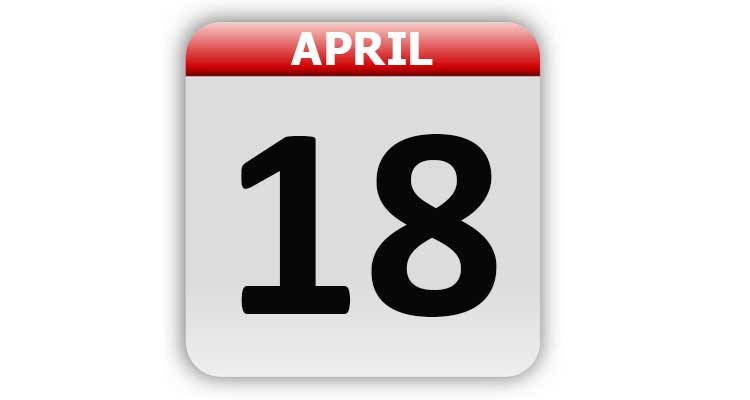 1775 – American revolutionaries Paul Revere, William Dawes and Samuel Prescott rode though the towns of Massachusetts giving the warning that the Regulars were coming out. The phrase “the British are coming” was attributed to Revere even though he probably never used that wording.

1838 – The Wilkes’ expedition to the South Pole set sail.

1846 – The telegraph ticker was patented by R.E. House

1877 – Charles Cros wrote a paper that described the process of recording and reproducing sound. In France, Cros is regarded as the inventor of the phonograph. In the U.S., Thomas Edison gets the credit.

1906 – The Great San Francisco, CA, earthquake hit. The original death toll was cited at about 700. Later information indicated that the death toll may have been 3 to 4 times the original estimate.

1910 – Walter R. Brookins made the first airplane flight at night.

1938 – Superman made his debut when he appeared in the first issue of Action Comics. (Cover date June 1938)

1938 – President Franklin Roosevelt threw out the first ball preceding the season opener between the Washington Senators and the Philadelphia Athletics.

1960 – The Mutual Broadcasting System was sold to the 3M Company of Minnesota for $1.25 million.

1983 – The U.S. Embassy in Beirut, Lebanon, was blown up by a suicide car-bomber. 63 people were killed including 17 Americans.

1984 – Daredevils Mike MacCarthy and Amanda Tucker made a sky dive from the Eiffel Tower. The jump ended safely.

1985 – Ted Turner filed for a hostile takeover of CBS.

1995 – Joe Montana of the San Francisco 49ers retired from football after 17 NFL seasons.

1999 – Wayne Gretzky, of the New York Rangers, played his final game in the NHL. He retired as the NHL’s all-time leading scorer and holder of 61 individual records.

2000 – The Nasdaq had the biggest one-day point gain in its history.

2002 – Actor Robert Blake and his bodyguard were arrested in connection with the shooting death of Blake’s wife, Bonny Lee Bakley, who was shot in the couple’s car outside a Studio City, CA restaurant the previous May.

2003 – Etta James received a star on the Hollywood Walk of Fame.

2014 – Sixteen people were killed in an avalanche on Mount Everest.

2019 – A redacted version of the Mueller Report was released to the United States Congress and the public. The report found no collusion between Russian and President Donald Trump’s campaign, but numerous instances of possible obstruction of justice.

International Day for Monuments and Sites

Tags: A Look Back, April 18, Celebrity Birthdays, Days of the Year, Today in History