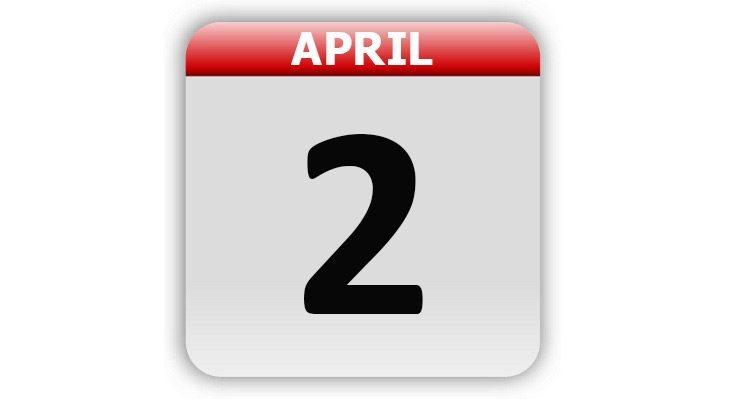 1792 – Congress passed the Coinage Act to regulate the coins of the United States. The act authorized $10 Eagles, $5 Half Eagles, $2.50 Quarter Eagle gold coins, silver dollars, dollars, quarters, dimes and half-dimes to be minted.

1872 – G.B. Brayton received a patent for the gas-powered streetcar.

1877 – The first Egg Roll was held on the grounds of the White House in Washington, DC.

1902 – “The Electric Theatre”, the first full-time movie theater in the U.S., opened in Los Angeles, CA.

1910 – Karl Harris perfected the process for the artificial synthesis of rubber.

1917 – President Woodrow Wilson presented a declaration of war against Germany to Congress.

1932 – A $50,000 ransom was paid for the infant son of Charles and Anna Lindbergh. The child was not returned and was found dead the next month.

1935 – Sir Watson-Watt was granted a patent for RADAR.

1956 – Television soap operas “The Edge of Night” and “As the World Turns” debuted on CBS.

1958 – The National Advisory Council on Aeronautics was renamed NASA.

1966 – The first of 850,000 coho salmon were planted into streams emptying into Lake Michigan. Their success has made them the backbone of Michigan open-water sport fishing.

1975 – Construction of the CN Tower was completed in Toronto, Ontario, Canada. It reached 1,815.4 feet in height, becoming the world’s tallest free-standing structure.

1978 – The television show “Dallas”, the first of the ultrapopular nighttime soaps about wealth and power, premiered on CBS.

1985 – The NCAA Rules Committee adopted the 45-second shot clock for men’s basketball to begin in the 1986 season.

1987 – The speed limit on interstate highways was increased to 65 miles per hour in limited areas.

1992 – Mob boss John Gotti was convicted in New York, NY of murder and racketeering. He was later sentenced to life in prison.

1995 – The costliest strike in professional sports history ended when baseball owners agreed to let players play without a contract.

1999 – The first ever floorless roller coaster opened at Six Flags Great Adventure in New Jersey. It was originally called “Medusa”, but has since been renamed “Bizarro”.

2014 – The Supreme Court ruled that limits on the total amount of money individuals can give political candidates and political action committees were unconstitutional.

2014 – A shooting spree occurred at the Fort Hood Army base in Texas. Four people died, including the gunman, with 16 others injured.

2020 – Michigan’s Governor Gretchen Whitmer officially suspended in-person learning for the rest of the school year at K-12 schools across the state due to COVID-19. The state of Michigan ranked 3rd in number of COVID-19 cases and deaths.

Tags: A Look Back, April 2, Celebrity Birthdays, Days of the Year, Today in History