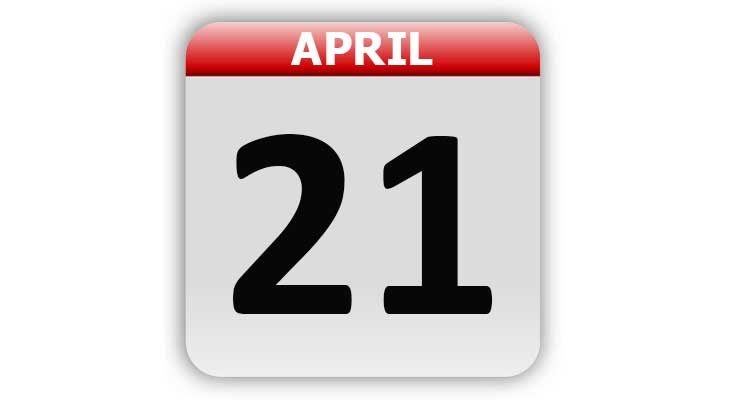 1856 – The Mississippi River was crossed by a rail train for the first time (between Davenport, IA, and Rock Island, IL).

1892 – The first Buffalo was born in Golden Gate Park.

1895 – Woodville Latham and his sons demonstrated their Panopticon. It was the first movie projector developed in the United States.

1918 – German fighter ace Manfred von Richthofen, “The Red Baron,” was shot down and killed during World War I.

1934 – The “Surgeon’s Photograph”, the most famous photo allegedly showing the Loch Ness Monster, was published in the Daily Mail. In 1999, it is revealed to be a hoax.

1960 – Dick Clark testified before a congressional committee investigating payola. He admitted that he had a financial interest in 27 percent of the records he played on his show in a period of 28 months.

1962 – The Seattle World’s Fair (Century 21 Exposition) opened. It was the first World’s Fair in the U.S. since World War II.

1972 – Apollo 16 astronauts John Young and Charles Duke explored the surface of the moon.

1982 – Rollie Fingers, of the Milwaukee Brewers, became the first pitcher to record 300 saves.

1984 – In France, it was announced that doctors had found virus believed to cause AIDS.

1986 – Geraldo Rivera opened a vault that belonged to Al Capone at the Lexington Hotel in Chicago, IL. Nothing of interest was found inside.

1987 – Special occasion stamps were offered for the first time by the Postal Service. “Happy Birthday” and “Get Well” were among the first to be offered.

1996 – Michael Jordan and the Chicago Bulls set an NBA record by winning their 72nd game in a season.

1998 – Astronomers announced in Washington that they had discovered possible signs of a new family of planets orbiting a star 220 light-years away.

2000 – North Carolina researchers announced that the heart of a 66 million-year-old dinosaur was more like a mammal or bird than that of a reptile.

2014 – Flint, MI switched their water source to the Flint River, beginning the ongoing Flint water crisis which has caused lead poisoning in up to 12,000 people, and 15 deaths from Legionnaires disease, ultimately leading to criminal indictments against 15 people, five of whom have been charged with involuntary manslaughter.

Tags: A Look Back, April 21, Celebrity Birthdays, Days of the Year, Today in History