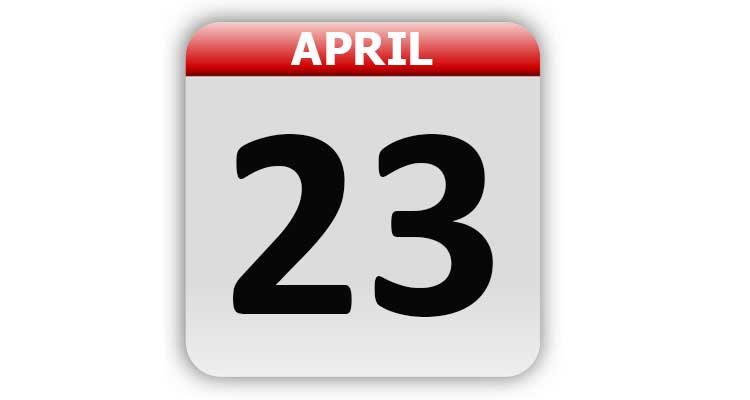 1635 – In Boston, MA, the Boston Public Latin School was established. It was the first public school building in the United States.

1896 – The Vitascope system for projecting movies onto a screen was demonstrated in New York, NY.

1900 – The word “hillbilly” was first used in print in an article in the “New York Journal.” It was spelled “Hill-Billie”.

1915 – The A.C.A. became the National Advisory Council on Aeronautics.

1951 – The Associated Press began use of the new service of teletype setting.

1954 – Hank Aaron, of the Milwaukee Braves, hit his first major-league home run on this day.

1982 – The U.S. Bureau of Labor Statistics reported that consumer prices declined the previous month (March). It was the first decline in almost 17 years.

1985 – The all-star charity group U.S.A. for Africa released their album “We Are the World”.

1985 – The Coca-Cola Company announced that it was changing its 99-year-old secret formula. “New Coke” was not successful, which resulted in them returning to the original version in less than three months. New Coke remained on the market until 2002.

1988 – A U.S. federal law took effect that banned smoking on flights that were under two hours.

1988 – Kanellos Kanelopoulos set three world records for human-powered flight when he stayed in the air for 74 miles and four hours in his pedal-powered “Daedalus”.

1997 – An infertility doctor in California announced that a 63-year-old woman had given birth in late 1996. The child was from a donor egg. The woman is the oldest known woman to give birth.

1997 – The Four Tops received a star on the Hollywood Walk of Fame.

2003 – President George W. Bush signed legislation that authorized the design change of the 5-cent nickel for release in 2004. It was the first change to the coin in 65 years. The change, to commemorate the 200th anniversary of the Louisiana Purchase, was planned to run for only two years before returning to the previous design.

Tags: A Look Back, April 23, Celebrity Birthdays, Days of the Year, Today in History