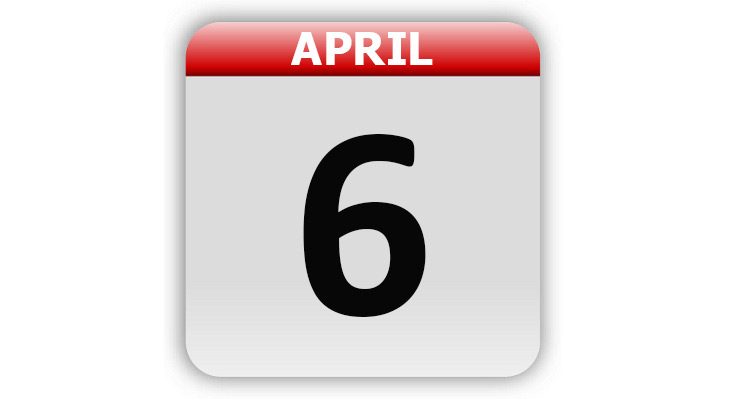 1830 – Joseph Smith and five others organized the Mormon Church in western New York.

1875 – Alexander Graham Bell was granted a patent for the multiple telegraph, which sent two signals at the same time.

1896 – The first modern Olympic Games began in Athens, Greece, 1,500 years after the original games were banned by Roman Emperor Theodosiua I.

1909 – Americans Robert Peary and Matthew Henson claimed to be the first men to reach the North Pole.

1916 – Charlie Chaplin, at age 26, became the highest-paid film star in the world when he signed a contract with Mutual Film Corporation for $675,000 a year. (It would be equivalent to about $15 million today.)

1924 – Four planes left Seattle, WA, on the first successful flight around the world.

1926 – Varney Airlines made their first commercial flight. Varney was the root company of United Airlines.

1930 – A baker in Schiller Park IL, named James Alexander Dewar, invented a snack cake filled with banana cream. He called it the “Twinkie”. Due to banana rationing during World War II, the filling was changed to vanilla cream.

1943 – 4,000 Grand Rapids, MI citizens gathered at the Kent County Airport to dedicate a B-17 bomber which was financed by war bonds bought by students of South High School. They raised $375,000.

1947 – The first Tony Awards were presented for theatrical achievement.

1956 – Capitol Tower, the home of Capitol Records in Hollywood, CA, was dedicated. It was the first circular office tower designed in America. It is 13 stories tall and 92 feet in diameter.

1965 – The first communications satellite to be placed in geosynchronous orbit, Early Bird, was launched.

1965 – President Lyndon B. Johnson authorized the use of ground troops in combat operations in Vietnam.

1974 – The Swedish band ABBA won the Eurovision Song Contest 1974 with the song “Waterloo”, which launched their international career.

1980 – Post-It Notes first appeared in stores. 3M produced these small pieces of paper with a re-adherable strip of glue on the back. Originally small yellow squares, Post-it Notes and related products are available in various colors, shapes, sizes and adhesive strengths. As of 2019, there are at least 26 documented colors of Post-it Notes.

1983 – The U.S. Veteran’s Administration announced it would give free medical care for conditions traceable to radiation exposure to more than 220,000 veterans who participated in nuclear tests from 1945 to 1962.

1985 – William J. Schroeder became the first artificial heart recipient to be discharged from the hospital.

1997 – Mario Lemieux, of the Pittsburgh Penguins, announced that he would retire from the National Hockey League following the playoffs of the current season.

1998 – Citicorp and Travelers Group announced that they would be merging. The new creation was the largest financial-services conglomerate in the world. The name would become Citigroup on October 8th.

1998 – The Dow Jones industrial average closed above 9,000 points for the first time.

International Day of Sport for Development and Peace

Tags: A Look Back, April 6, Celebrity Birthdays, Days of the Year, Today in History