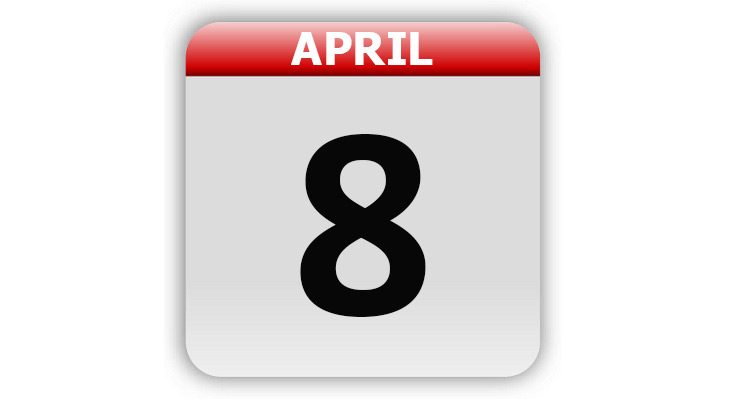 1789 – The U.S. House of Representatives held its first meeting.

1834 – In New York, NY, Cornelius Lawrence became the first mayor to be elected by popular vote in a city election.

1906 – Auguste Deter, the first person to be diagnosed with Alzheimer’s disease, died.

1911 – The first squash tournament was played at the Harvard Club in New York, NY.

1913 – The Seventeenth amendment was ratified, requiring direct election of Senators.

1931 – The robin became Michigan’s official state bird. The robin was voted on by the state’s 4th graders.

1935 – The Works Progress Administration was approved by the U.S. Congress.

1943 – President Franklin D. Roosevelt, in an attempt to check inflation, froze wages and prices, prohibited workers from changing jobs unless the war effort would be aided thereby, and barred rate increases by common carriers and public utilities.

1947 – The first illustrated insurance policy was issued by the Allstate Insurance Company.

1953 – The bones of Sitting Bull were moved from North Dakota to South Dakota.

1959 – A team of computer manufacturers, users and university people led by Grace Hopper met to discuss the creation of a new programming language that would be called COBOL.

1983 – Magician David Copperfield made the Statue of Liberty disappear.

1987 – Los Angeles Dodgers executive Al Campanis resigned over remarks he had made. While on ABC’s “Nightline”, Campanis said that blacks “may not have some of the necessities” to hold managerial jobs in major-league baseball.

1990 – The television show “Twin Peaks” premiered on ABC. It ran for two seasons until it was cancellation in 1991.

1991 – An unsuccessful lawsuit filed against Virgin Records claimed that Paula Abdul did not do all the singing on her album, “Forever Your Girl”.

1994 – Smoking was banned in the Pentagon and all U.S. military bases.

1994 – The RIAA announced that Pink Floyd’s 1973 album “Dark Side of the Moon” had become the fourth biggest-selling album in U.S. history. It had passed the 13 million mark in sales.

2004 – National Security Adviser Condoleezza Rice testified that President George Bush was warned of suspicious activity by terrorists located in the U.S. about a month before the 9/11 attacks occurred.

2008 – The Roman Catholic priest accused of stalking Conan O’Brien pleaded guilty to two counts of disorderly conduct and was ordered to stay away from the talk show host for two years.

Draw a Picture of a Bird Day

National All is Ours Day

Tags: A Look Back, April 8, Celebrity Birthdays, Days of the Year, Today in History