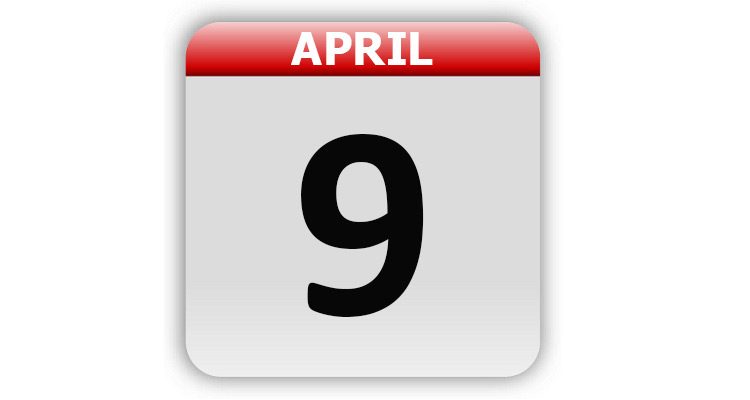 1867 – The U.S. Senate ratified the treaty with Russia that purchased the territory of Alaska by one vote.

1912 – The first exhibition baseball game was held at Fenway Park in Boston, MA. The game was between Red Sox and Harvard.

1945 – National Football League officials made it mandatory for football players to wear socks in all league games.

1950 – Bob Hope made his first television appearance on “Star-Spangled Review” on NBC-TV.

1957 – The Suez Canal was cleared for all shipping.

1959 – NASA announced the selection of America’s first seven astronauts. The news media begins to refer to them as the “Mercury Seven”.

1984 – The song “Flashdance…What a Feeling”, by Irene Cara, won Best Song at the Oscars.

1986 – It was announced that Patrick Duffy’s character on the TV show Dallas would be returning after being killed off.

2003 – Baghdad fell to American forces. Iraqis turned on symbols of their former leader Saddam Hussein, pulling down a statue of him and tearing it into pieces.

2007 – Apple announced it had sold its one-hundred millionth iPod.

2009 – The television show “Parks and Recreation” premiered on NBC.

2017 – After refusing to give up his seat on an overbooked United Airlines flight, Dr. David Dao Duy Anh was forcibly dragged off the flight by security officers. This lead to major criticism of United Airlines.

Tags: A Look Back, April 9, Celebrity Birthdays, Days of the Year, Today in History