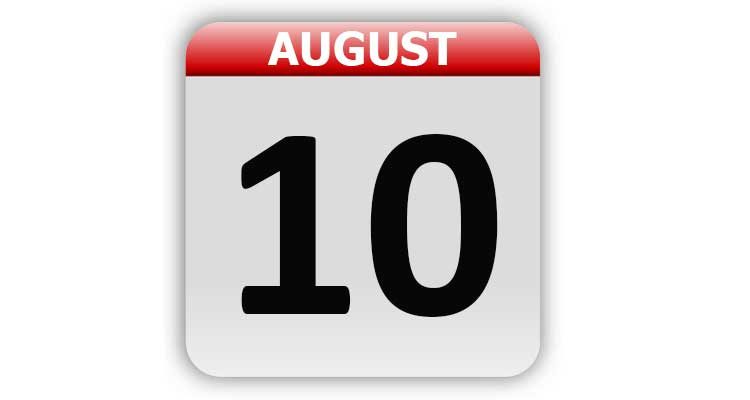 1846 – The Smithsonian Institution was chartered by Congress. The “Nation’s Attic” was made possible by $500,000 grant given by scientist Joseph Smithson.

1859 – In Boston, MA, the first milk inspectors were appointed.

1869 – The motion picture projector was patented by O.B. Brown.

1885 – The first electric streetcar, to be used commercially, was operated in Baltimore, MD, by Leo Daft.

1918 – The Grand Rapids, MI Police Court Docket for the day was blank, something that had only happened twice in 25 years.

1927 – Mount Rushmore was formally dedicated. The individual faces of the Presidents were dedicated later.

1937 – The first electric guitar, the Rickenbacker Frying Pan, was patented.

1946 – The nation’s first streamlined train built since World War II, the Pere Marquette, began operation. It made the trip from Grand Rapids, MI to Detroit, MI in 160 minutes.

1947 – A 4.7 magnitude earthquake was centered at Coldwater, MI. It was felt as far away as Wisconsin and Illinois.

1947 – William Odom completed an around-the-world flight. He set the solo record by completing the flight in 73 hours and 5 minutes.

1949 – The National Military Establishment changed its name to the Department of Defense.

1965 – In Austin, TX, a fire burned part of the 20th floor of the 27-story University of Texas main building. A collection that contained items once owned by escape artist Harry Houdini and circus magnate P.T. Barnum were damaged by smoke and water.

1985 – Michael Jackson paid $47.5 million for the ATV catalog, which owned and controled 251 songs written by John Lennon and Paul McCartney. McCartney was outbid in the sale by Jackson.

1993 – Ruth Bader Ginsburg took office as only the second woman to serve on the U.S. Supreme Court.

1995 – Timothy McVeigh and Terry Nichols were indicted for the bombing of the Oklahoma City Federal Building. Michael Fortier pleaded guilty in a plea-bargain for his testimony.

2004 – The iTunes Music Store became the first store to have a catalog of more than one million songs.

2020 – A derecho in Iowa became the most costly thunderstorm disaster in U.S. history.

Tags: A Look Back, August 10, Celebrity Birthdays, Days of the Year, Today in History