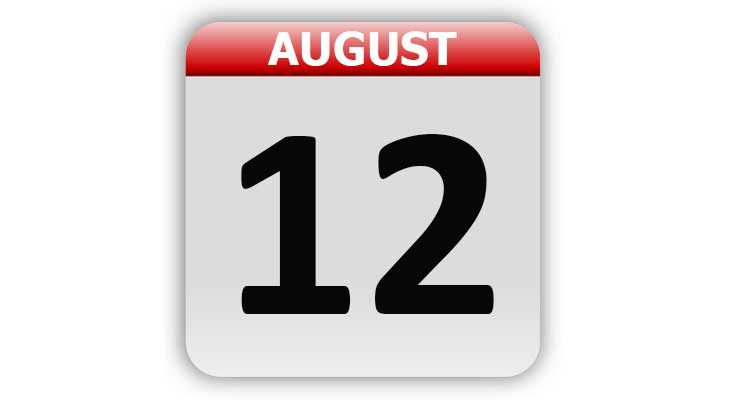 1851 – Isaac Singer was issued a patent for his double-headed sewing machine.

1865 – Disinfectant was used for the first time during surgery by Joseph Lister.

1877 – Thomas Edison invented the phonograph and made the first sound recording.

1898 – The Spanish-American War was ended with the signing of the peace protocol. The U.S. acquired Guam, Puerto Rico and the Philippines. Hawaii was also annexed.

1927 – Pilot Charles Lindbergh started his 26 city tour in Grand Rapids, MI. 100,000 people cheered him in a parade. His mother joined him and he took her for a plane ride in “The Spirit of St. Louis”.

1939 – “The Wizard of Oz” premiered at the Strand Theatre in Oconomowoc, WI. The movie premiered in Hollywood on August 15th.

1960 – NASA launched Echo A1 from Cape Canaveral, FL. It was their first successful communications satellite. It was a 100 ft metallic balloon that passively reflected signals.

1964 – Mickey Mantle set a major league baseball record when he hit home runs from both sides of the plate in the same game.

1966 – John Lennon apologized at a news conference in Chicago, IL, for his remark that “the Beatles are more popular than Jesus.”

1977 – The first free flight of the Space Shuttle Enterprise.

1981 – The IBM Personal Computer was released.

1986 – NASA announced that they had selected a new rocket design for the Space Shuttle. The move was made to correct flaws that were believed to have been responsible for the Challenger disaster.

1988 – The movie “The Last Temptation of Christ” opened in theaters.

1990 – Sue, the largest and most complete Tyrannosaurus Rex skeleton found to date, was discovered by Sue Hendrickson at a reserve in Faith, South Dakota.

1992 – The U.S., Canada, and Mexico announced that the North American Free Trade Agreement had been created after 14 months of negotiations.

1994 – Major league baseball players went on strike rather than allow team owners to limit their salaries. The strike lasted for 232 days. The strike forced the cancellation of the 1994 World Series for the first time in 90 years.

2016 – The movie “Sausage Party” was released. It would become the highest grossing R-rated animated movie of all time.

Tags: A Look Back, August 12, Celebrity Birthdays, Days of the Year, Today in History