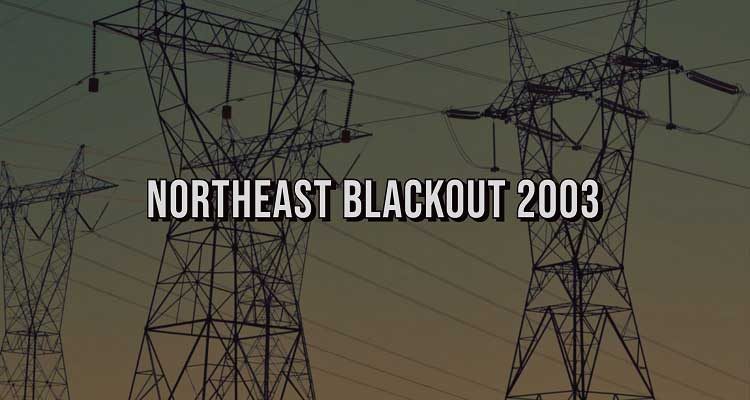 It was a normal Thursday afternoon in the summer, or so many people thought. Then at about 10 minutes after 4 pm, almost 55 million people found themselves without power in eight states in the northeast United States and the Canadian province of Ontario. Twenty-one power plants shut down in just three minutes. For the lucky ones, some power was back on by 11 pm that evening. Some people had to wait almost two weeks for their power to be restored.

Many people were trapped in elevators and subway trains. There were reports of people stuck on amusement park rides. Many businesses had to switch to generator power if they had back up equipment to turn to. Those who owned cell phones in 2003 also found their service interrupted.

What was the reason for this massive power outage? The primary cause was a software bug in the alarm system at the control room of FirstEnergy. The system failed to warn  operators of the need to redistribute power after overloaded transmission lines drooped into overgrown trees. What should have been a manageable and local blackout developed into the entire Northeast region failing.

In Michigan, the power outage made it almost as far west as Grand Rapids. About 2.3 million households and businesses were affected, including almost all of Metro Detroit, Lansing, Ann Arbor, and surrounding communities. The blackout affected three utilities companies: Detroit Edison, Lansing Board of Water & Light, and a portion of Consumers Energy. With no power, many were left without ways to get gasoline for their automobiles. Those that did have enough gas in their tank, headed to surrounding areas that still had power. As a result, stores were crowded, restaurants were packed, many hotels were booked to capacity, and there were many long lines at the gas stations in the towns that still had power.

The weather was warm and humid in much of the affected region. It was the heat that triggered the initial event that caused the outage. The high temperatures, along with increased energy demand, caused power lines to sag as higher currents heated the lines.

Read more about the Northeast Blackout of 2003 on Wikipedia.org.

Did you lose power? Where were you at the time? Leave your comments below….