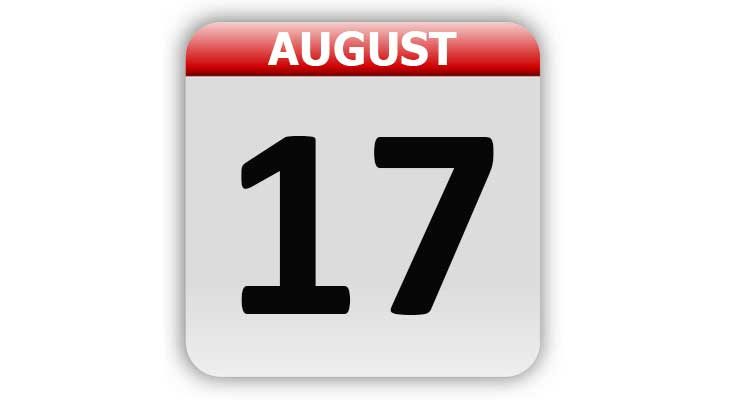 1859 – A hot air balloon was used to carry mail for the first time. John Wise left Lafayette, IN, for New York City, NY with 100 letters. After going only 27 miles, he had to land.

1896 – The Klondike gold rush was set off by George Carmack when he discovered gold on Rabbit Creek in Alaska.

1945 – The George Orwell novel “Animal Farm” was first published. The book used farm animals to represent the events of the 1917 Russian Revolution.

1970 – Venera 7 launched. It would later become the first spacecraft to successfully transmit data from the surface of another planet (Venus).

1978 – The Double Eagle II became the first balloon to cross the Atlantic Ocean when it landed in Miserey, France (near Paris), 137 hours after leaving Preque Isle, ME.

1982 – The first compact discs (CDs) were released to the public in Germany.

1982 – The United States Senate passed an immigration bill that granted permanent resident status to any illegal aliens who had arrived in the U.S. prior to 1977.

1996 – Ross Perot was announced to be the Reform Party’s Presidential candidate. It was the party’s first-ever candidate.

1998 – President Bill Clinton admitted to the nation in a taped testimony that he had an “improper physical relationship” with White House intern Monica Lewinsky. Later in the day, he admitted before the nation that he “misled people” about the relationship.

1998 – NationsBank and BankAmerica merged to create the largest U.S. bank.

1998 – Carlos Santana received a star on the Hollywood Walk of Fame.

National I LOVE My Feet Day!

Tags: A Look Back, August 17, Celebrity Birthdays, Days of the Year, Today in History