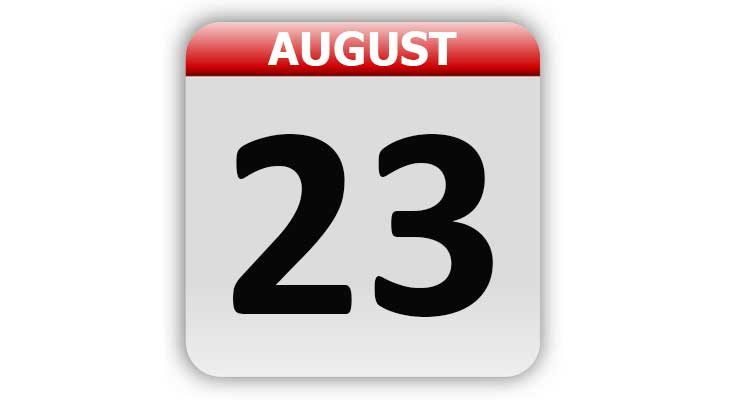 1935 – The last trolley car made its final run in Grand Rapids, MI along the Cherry-Plainfield line.

1938 – RCA Introduced the Indian head test pattern. It would be used universally to calibrate black and white TV broadcasts.

1962 – The first live TV program was relayed between the United States and Europe. The transmission utilzed the Telstar satellite.

1966 – Lunar Orbitor 1 took the first photograph of Earth from orbit around the Moon.

1975 – The Detroit Lions moved into the Pontiac Silverdome (originally called the Pontiac Metropolitan Stadium). The Lions beat the Kansas City Chiefs in an exhibition game. The team moved to Ford Field in 2020.

1984 – The house used as the fictitious home on the show “Dallas”, the South Fork Ranch, was sold. It was to be turned into a hotel.

1991 – The World Wide Web was opened to the public (although inventor Tim Berners-Lee claims the date is wrong).

1993 – Duran Duran received a star on the Hollywood Walk Of Fame.

1993 – The Los Angeles Police confirmed that Michael Jackson was the subject of a criminal investigation.

1986 – The movie “A Very Brady Sequel” premiered in theaters.

1999 – TV Talk-show host Montel Williams announced that he has been diagnosed with multiple sclerosis.

2000 – Richard Hatch was revealed as the winning castaway on the first season of TV’s “Survivor.” Hatch won $1 million for his stay on the island of Pulau Tida in the South China Sea. He was later convicted of failing to pay income tax on the prize.

2011 – A magnitude 5.8 earthquake occurred in Virginia. Damage occurs to monuments and structures in Washington, DC and the damage is estimated at $200-300 million.

Tags: A Look Back, August 23, Celebrity Birthdays, Days of the Year, Today in History