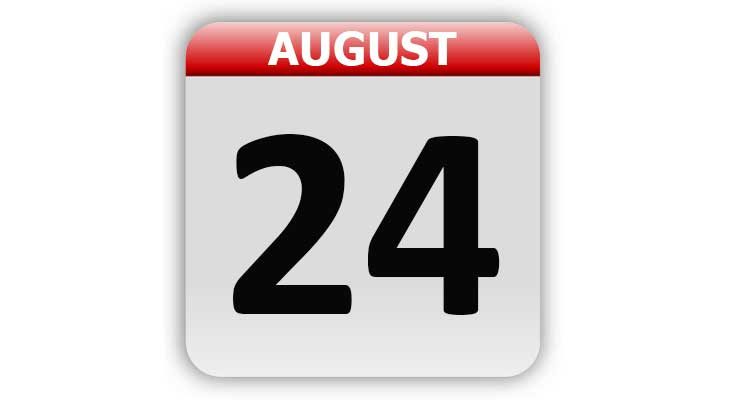 1456 – The printing of the Gutenberg Bible was completed.

1814 – Washington, DC, was invaded by British forces. They set fire to the White House and Capitol.

1869 – Cornelius Swarthout received a patent for the waffle iron.

1912 – A four-pound limit was set for parcels sent through the U.S. Postal System.

1932 – Amelia Earhart became the first woman to fly across the U.S. non-stop. The trip from Los Angeles, CA to Newark, NJ, took about 19 hours.

1981 – Mark David Chapman was sentenced to 20 years to life in prison for murdering John Lennon.

1986 – Frontier Airlines shut down. Thousands of people were left stranded.

1989 – Commissioner Bart Giamatti banned Pete Rose, the manager of the Cincinnati Reds, from baseball — for life — after being accused of gambling on baseball.

1995 – Microsoft’s “Windows 95” went on sale. (The typeface Comic Sans and the game Minesweeper came pre-installed in the software.)

1998 – A donation of 24 beads was made to the Indian Museum of North America at the Crazy Horse Memorial in South Dakota. The beads are said to be those used in 1626 to buy Manhattan from the Indians.

2001 – In McAllen, TX, Bridgestone/Firestone agreed to settle out of court and pay $7.5 million to a family in a rollover accident in their Ford Explorer.

2006 – The International Astronomical Union (IAU) redefined the term “planet” such that Pluto is now considered a dwarf planet.

Tags: A Look Back, August 24, Celebrity Birthdays, Days of the Year, Today in History