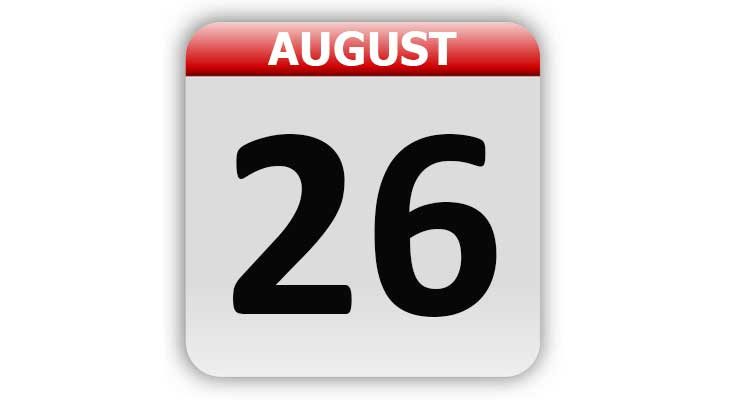 1873 – The first public kindergarten in the United States was authorized by the school board of St. Louis, MO.

1920 – The 19th amendment to the U.S. Constitution went into effect. The amendment prohibits discrimination on the basis of sex in the voting booth.

1939 – The first televised major league baseball games were shown. The event was a double-header between the Cincinnati Reds and the Brooklyn Dodgers.

1957 – The first Edsel, made by the Ford Motor Company, rolled of the assembly line.

1961 – The International Hockey Hall of Fame opened in Toronto, Canada.

1973 – The University of Texas became the first school to offer a course in belly dancing.

1987 – Sonny Bono announced that he was running for Mayor of Palm Springs, his first political office. He ended up getting elected for the position.

1987 – The Fuller Brush Company announced plans to open two retail stores in Dallas, TX. Previously, the company had sold its products door to door for 81 years.

1998 – Microsoft was under investigation by the U.S. government to discover if they “bullied” Intel into delaying new technology.

2011 – The Boeing 787 Dreamliner, Boeing’s all new composite airliner, received certification from the EASA and the FAA.

2015 – Two journalists were shot and killed by a disgruntled former coworker while conducting a live report in Moneta, Virginia.

2018 – Three people were killed and eleven wounded during a mass shooting at a Madden NFL ’19 video game tournament in Jacksonville, Florida.

Tags: A Look Back, August 26, Celebrity Birthdays, Days of the Year, Today in History