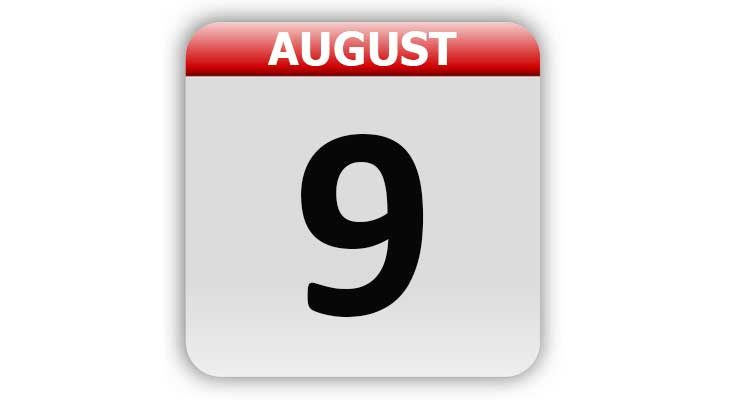 1173 – Construction of the campanile of the Cathedral of Pisa (now known as the Leaning Tower of Pisa) began. It would take two centuries to complete.

1790 – The first ship to carry the American Flag around the world, The Columbia, returned to Boston Harbor after a three-year voyage.

1831 – The first steam locomotive began its first trip between Schenectady and Albany, NY.

1859 – The escalator was patented by Nathan Ames.

1892 – Thomas Edison received a patent for a two-way telegraph.

1910 – A.J. Fisher received a patent for the electric washing machine.

1930 – Betty Boop made her cartoon debut in “Dizzy Dishes”, created by Max Fleischer.

1944 – The United States Forest Service and the Wartime Advertising Council released posters featuring “Smokey the Bear” for the first time.

1945 – The U.S. dropped an atomic bomb on Nagasaki. The bombing came three days after the bombing of Hiroshima. About 74,000 people were killed. Japan surrendered August 14.

1947 – An earthquake damaged chimneys and cracked plaster in Michigan. Damage reached as far north as Muskegon and Saginaw.

1969 – In the early morning hours of August 9th, pregnant actress Sharon Tate was stabbed to death and four others were killed (knives and gunshots) in a home in the Hollywood Hills, CA. Charles Manson and his cult are later convicted of the crime.

1975 – The New Orleans Superdome was officially opened when the Saints played the Houston Oilers in exhibition football. The new Superdome cost $163 million to build.

2000 – Bridgestone/Firestone announced the recall of 6.5 million tires implicated in hundreds of accidents and at least 46 deaths.

2014 – Michael Brown, an unarmed 18 year old African American male in the St. Louis suburb of Ferguson, MO, was shot and killed by a Ferguson police officer. It sparked protests and unrest in the city.

Tags: A Look Back, August 9, Celebrity Birthdays, Days of the Year, Today in History