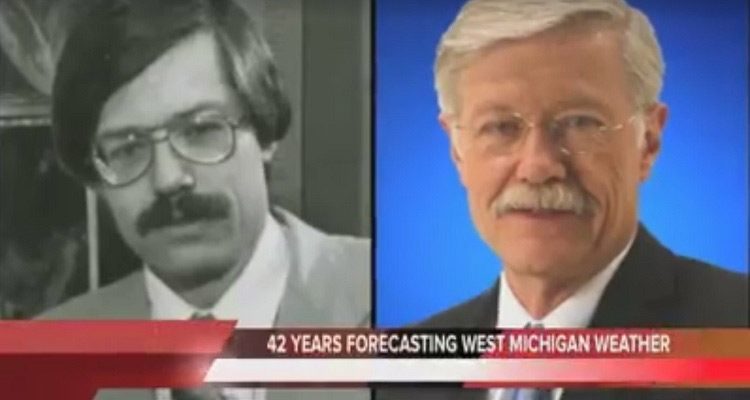 A big CONGRATULATIONS go out to Bill Steffen today!! He has been forecasting the weather in West Michigan for 42 years!

Our first TV meteorologist in West Michigan was Craig James, who arrived at WZZM in September of 1973. On November 5, 1974, Bill Steffen made his TV debut here in our area. The two spent many years working together at TV-13, only to both eventually relocate to WOOD TV-8. Craig made the jump in 1985 and Bill arrived at WOOD TV in July of 2001.

Many, like myself, grew up watching both Bill and Craig. When Bill first started he would do the early morning weather forecasts. It was just part of the morning ritual to eat breakfast, get ready for school, at watch Bill give the weather forecast for the day before you would head out the door. Bill would always end his forecast with a little limerick. I think he should bring the poems back to the end of his forecast!!

From Bill’s Blog on his anniversary last year: “Notable storms I’ve covered included the Blizzard of 1978, the Kalamazoo Tornado of 5/13/80 and the famous derecho thunderstorm event of 5/31/98. I thought that doing this into the 5th decade…there would be some burnout, but no…I’m just as excited about storms and weather as I was when I was a kid.”

“I can’t thank my two employers enough for paying me to have this much fun and I want to especially thank all of you who have watched me on TV, listened to me on radio and now read my forecasts and weather writings online. Thanks to my wonderful wife (of nearly 38 years), Gayle and my kids for putting up with my schedule and waiting until I got up to open Christmas presents.”

I have worked with many broadcasters over the years. As with any profession, there are good and there are bad. Bill falls into the “very good at what they do” category. Bill falls into my list of great broadcasters like Ernie Harwell, Harry Caray, Warren Reynolds, Walter Cronkite (who would have been 100 on November 4th), Craig James, Dick Richards and Dick Evans…just to name a few.

As part of Bill’s Anniversary celebration, his daughters, Julie, Marie, and Michelle, put together a great video for him. I was honored to have been asked to do a “congratulations” video for Bill…

Also, if you would like to leave a message for Bill and congratulate him on his accomplishments, here is Bill’s Facebook page.