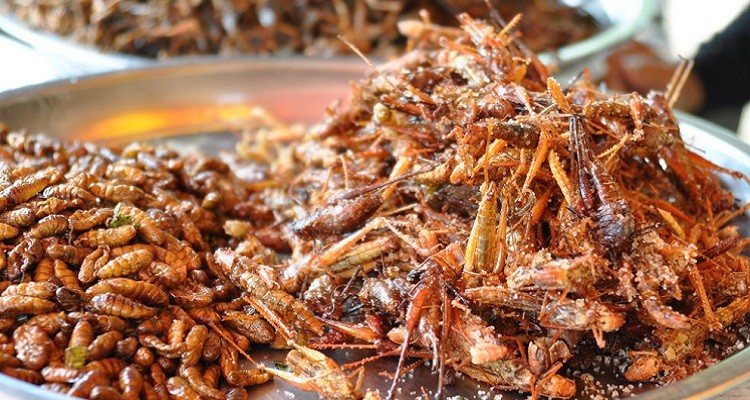 Bugs for Breakfast, Bugs for Lunch, Bugs for Dinner

As I child I remember watching the “Jungle Book” movie. Remember the song “Bare Necessities”? (If you click on that link and watch the video — I will not be held responsible for that song running through your head for the next week!) In the lyrics of the song it talks about finding ants and to “maybe try a few”. So I did! They were pretty bitter and sour tasting. One ant was enough for me.

Then, as an adult, we interviewed a spokesperson for a company that was encasing bugs — like crickets and grasshoppers — into suckers. So, in the name of research, I had to try one of those as well. With the sugary coating it wasn’t too bad. But I do recall getting the cricket legs caught in my teeth.

And here’s an interesting statistic: Humans unintentionally eat (because the insects are mixed in with other foods) on average about a pound of insects a year. (And I thought the statistic about spiders climbing into your mouth when you are sleeping was horrible!)

Now let’s jump ahead to 2016. Who knew that in Detroit, on May 26-28th, a group called The North American Edible Insect Coalition was holding a meeting. At that gathering were 30 companies whose goal was to chart out ways to collect accurate data on the size and scope of the insect eating industry. Yuck! Yuck! And more yuck!

The information that they came up with will then be used when representatives head to our nation’s capitol, Washington, DC. They have to try and convince the Food and Drug Administration (FDA) to add insect-based foods to its database of what are called Generally Recognized as Safe (GRAS) foods. This designation is needed so they can get “insect” products into stores and restaurants. That’s right…intentionally!

An article I saw on Quartz online, said that for the last five years or so, bugs — like crickets — are being looked at as an alternative protein source

There are some places in the world who find bugs as a common food source. In places like Africa, Asia and Latin America it is not unusual to find people munching on things like ants, beetles, caterpillars, and other bugs.

Another article on their website even breaks down why we should think about eating bugs. The positive reasons presented were:

3. Economic reasons: I did not know this, but because insects are cold blooded, they are more efficient at converting feed into protein. That means it would cost less to raise these bugs to maturity. The article used as an example: “crickets need 12 times less feed than cattle, four times less than sheep, and half as much as pigs and broiler chickens to produce the same amount of protein”.

4. They are healthier: Insects are less likely to transmit diseases (like mad-cow disease).

5. Bugs are everywhere: There are more than 1,900 edible insect species.

Plus — my own observation: if we became accustom to eating bugs, they would be less of a pest in our homes and yards. We could look at them as being “free” food.

So, what’s for lunch? How about a cheesebugger? A cricket casserole? A BLT Sandwich (beetles, ladybugs and termites)?

If you’d like to read the entire article for yourself (that includes all the graphics and statistics), here is the link…The People Who Want You to Eat Bugs Are Now Lobbying in Washington.

Have you ever tried eating a bug? What did you think? Leave your comments below…