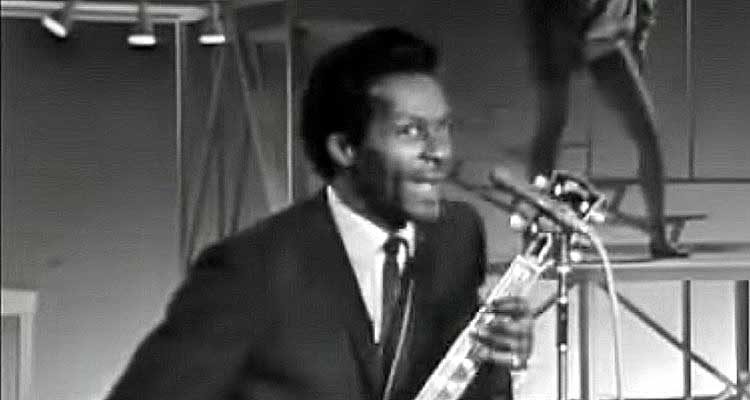 Rock and Roll icon Chuck Berry has died. He passed away on Saturday, March 18, 2017 at his home near Wentzville, MO. He was 90.

The St. Charles County Police Department responded to a medical emergency call at Berry’s home, which was located about 45 west of St. Louis, MO. The department said in their statement posted on Facebook, that lifesaving measures were unsuccessful.

Berry’s hit songs included “Johnny B. Goode”, ”Sweet Little Sixteen”, and “Roll Over Beethoven”. Berry would often do his signature “duck walk” during concerts. It was 1972, when Berry had the biggest hit of his career…a novelty song called “My Ding-a-Ling”. He never won a Grammy Award, but in 1984 the Recording Academy honored him a lifetime achievement award. Berry was among the first group of musicians to be inducted into the Rock and Roll Hall of Fame in 1986. “Rolling Stone” magazine places Berry 6th on their list of greatest guitarists.

In July 1979, Berry performed for President Jimmy Carter at the White House. Three days later, he was being sentenced to four months in federal prison and four years’ probation for income tax evasion. In 1990, police raided his home and found marijuana and recordings from a camera in the women’s bathroom at his restaurant. He agreed to a misdemeanor count of marijuana possession, a plea bargain, and ended up with a suspended jail sentence and two years’ probation. In his earlier years, He spent three years in reform school after getting caught for armed robbery and a spree of car thefts.

Berry had a degree in hairdressing and cosmetology. He at one point worked as a beautician.

His music continues to tour through space. His recording “Johnny B. Goode” is on golden records on the Voyager I and II spacecrafts which were launched in 1977.

To read more about Chuck Berry, here is his Wikipedia page.

Here is video of Chuck Berry performing “Johnny B. Goode” back in 1964…