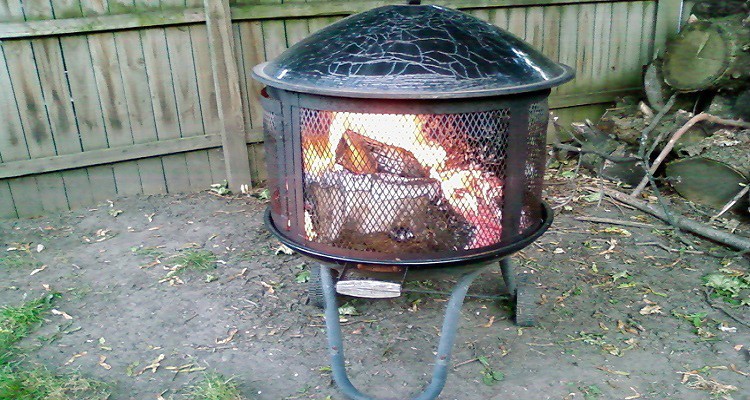 Many years ago, when I lived on the westside of Grand Rapids, I purchased one of those portable firepits. You know, the one that has two wheels, a black metal top and bottom and then some metal mesh sides with a door. I didn’t want a huge fire, but every now and then wanted to be able to have a fire, maybe make a s’more or two.

So one late spring evening back about 2005 or so, I decided I was going to pick up the tiny sticks in my yard and just burn them. None of the sticks were thicker than about the size of my finger. I ended up having a fire the size of maybe a bowling ball at it’s peak. Nothing huge. The fire burned beautifully for about 20 minutes. I was sitting out on the picnic table, with my dog “Scooby”, waiting for the final flames to die down.

About this time I start to hear the sirens of firetrucks off in the distance. It sounded like not one, but many firetrucks racing off to the scene of what must be a huge fire. I soon started to hear sirens coming from two different directions. That meant the fire departments on Bridge Street and Covell Avenue must both be responding to the fire. Wow, this is going to be a big one.

As I sat there listening to the sirens, they kept getting closer and closer. Soon I saw about a half dozen firetrucks (including a hook and ladder truck) turning down my road. I immediately thought maybe a neighbor’s house was on fire. I lived on the corner of my block and the fire trucks parked themselves on both roads. Soon there were firefighters walking around looking for smoke. I was doing the same thing…where was the fire? It appeared no one could find the smoke for any reported fire.

Then it dawned on me. Could someone have phoned in my “illegal” fire I had going in my portable firepit? All of my neighbors, except one, knew I had the portable firepit and had told me they didn’t have a problem with me using it. It was the new family behind me that I had never talked to about it.

So I walked up to one of the firefighters and asked what they were looking for. He said there was a report of a garage fire (I’m still not sure why the deemed a hook and ladder truck necessary for a reported garage fire). Well, I don’t have a garage, but I do have an 8’x8′ store shed…and it was NOT on fire. I asked if by chance someone could have phoned in to report my firepit. He nodded yes and my heart sunk to the bottom of my stomach. Why didn’t the neighbor just come over and say something? I could have put the fire out with one toss of the water from the melted ice cubes in the bottom of my water glass. Instead we had to empty out two fire stations.

The firefighter was very nice about it. He did offer me a tip…next time just have a package of hotdogs and buns nearby. Apparently you can have a fire to cook on, just not to burn for your enjoyment.

I was not fined or really even reprimanded for my illegal fire. I think the firefighter knew that the embarrassment alone was severe enough punishment. I was the talk of the neighborhood that summer.

So now, after many attempts, it looks like the city of Grand Rapids might finally allow these types of fires within the city limits. There has been debate from both sides of the issue.

To have a fire in your own backyard it would cost you $50 for a permit for the first year. After that the permit would be a $10 yearly charge. (This money would be used for covering the cost of issuing the permits).

With the stipulations that would be put on the fires, I’m not sure many would even be able to take advantage of this change.

To have a fire in your backyard:

I think the distance requirement will eliminate most people from being able to have a fire in their backyard. I’m not sure if on most city lots there is a place where you can be 20 feet from any structure and still be 20 feet from a fence and 20 feet from the property lines. I know my city lot was only 50 feet wide to start with.

So, yes I’m happy that the city of Grand Rapids is finally addressing this issue. A recent reader poll by mlive.com showed that about 83% of those who voted were in favor of having the option to have an “urban campfire”. We will have to wait and see what happens. The City Commission may take up this issue at a hearing scheduled for July 26th. Leave your thoughts below. Are you for or or against the idea?

If you would like to read more on this issue, here is an article from mlive.com.