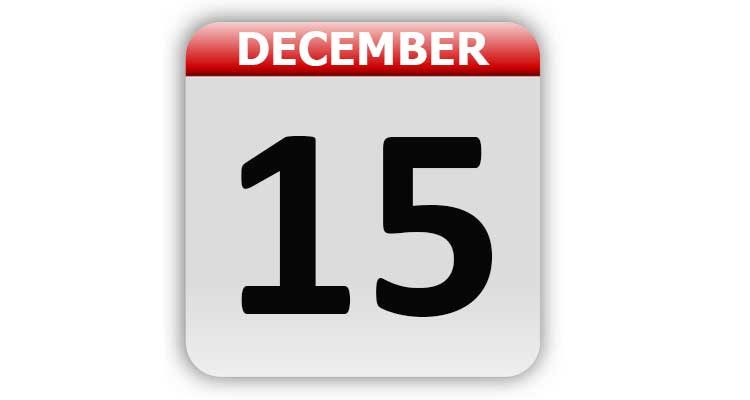 1791 – The first ten amendments to the Constitution, known as the Bill of Rights, went into effect following ratification by the state of Virginia.

1854 – The first street cleaning machine was put into use in Philadelphia, PA.

1877 – Thomas Edison received a patent for the phonograph.

1933 – The Twenty-first Amendment to the Constitution officially became effective, repealing the Eighteenth Amendment that prohibited the sale, manufacture, and transportation of alcohol.

1938 – President Franklin D. Roosevelt presided over the ground-breaking ceremonies for the Jefferson Memorial in Washington, DC.

1939 – “Gone With the Wind”, based on the novel by Margaret Mitchell, premiered at Loew’s Grand Theater in Atlanta, GA. The movie starred Vivien Leigh and Clark Gable.

1944 – Dr. R. Townley Paton and a small group of doctors laid the groundwork for the Eye-Bank for Sight Restoration.

1965 – Two U.S. manned spacecraft, Gemini 6 and Gemini 7, maneuvered within 10 feet of each other while in orbit around the Earth.

1979 – Chris Haney and Scott Abbott created their own trivia game called “Trivial Pursuit”. It is now available in over 26 countries and 17 languages.

2000 – The third reactor at the Chernobyl atomic power plant in Kiev, Ukraine, was shut down.

2000 – New York Senator-elect Hillary Rodham Clinton agreed to a $8 million book deal with Simon & Schuster. The book would be about her eight years in the White House. The advance was the highest ever to be paid to a member of the U.S. Congress.

2001 – The Leaning Tower of Pisa reopened after 11 years and $27 million spent to fortify it, without fixing its famous lean.

2001 – It was announced that Siena Heights University would begin offering a class called “Animated Philosophy and Religion.” The two-credit class would cover how religion and philosophy are part of popular culture and is based on the television series “The Simpsons”.

2013 – In the animated TV show “Family Guy”, the family dog, Brian, was hit and killed by a car. Public outrage resulted in the writers bringing him back just a few episodes later.

Tags: A Look Back, Celebrity Birthdays, Days of the Year, December 15, Today in History