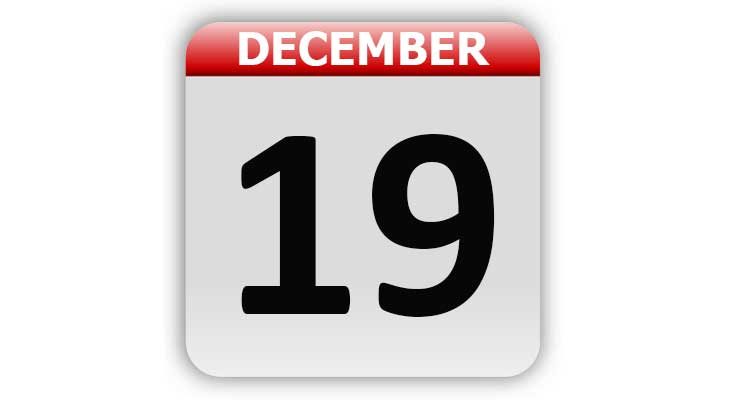 1842 – Hawaii’s independence was recognized by the U.S.

1856 – Celery was served at Kalamazoo, MI’s Burdick Hotel. It was the first time the vegetable was served to the public. Celery was introduced to the state of Michigan by a Scottish immigrant named George Taylor. He brought the celery seed from Scotland to southwest Michigan. For a time, Kalamazoo promoted themselves as the “Celery City”.

1871 – Albert L. Jones received a patent for his corrugated paper.

1917 – The first games of the new National Hockey League were played. Five teams made up the league: Toronto Arenas, Ottawa Senators, Quebec Bulldogs, the Montreal Canadiens and the Montreal Wanderers.

1924 – The last Rolls-Royce Silver Ghost was sold in London, England.

1957 – Elvis Presley had his draft notice served on him for the U.S. Army. He joined the 32nd Tank Battalion third Armor Corps based in Germany.

1971 – The movie “A Clockwork Orange”, based on Anthony Burgess’s novel of the same name, premiered in theaters.

1972 – Apollo 17 splashed down in the Pacific (crewed by Eugene Cernan, Ron Evans, and Harrison Schmitt) ending the Apollo program of manned lunar landings.

1974 – Nelson Rockefeller was sworn in as Vice President under President Gerald Ford under the provisions of the twenty-fifth Amendment of the Constitution.

1975 – John Paul Stevens was appointed a Justice of the Supreme Court of the United States.

1979 – ESPN televised its first NHL game, between the Washington Capitals and the Hartford Whalers.

1980 – Dolly Parton’s first feature film, “9 to 5”, with the Oscar nominated title tune she wrote and sang, opened in theaters nationwide.

1985 – ABC Sports announced that it is severing ties with Howard Cosell, who continued to broadcast on ABC Radio for another five years.

1986 – Michael Sergio, who parachuted into New York’s Shea Stadium during the first inning of Game 6 of the 1986 World Series, was fined $500 and sentenced to 100 hours of community service. On October 25th he landed on the infield with a “Let’s Go Mets” banner in the game between the New York Mets and the Boston Red Sox.

1990 – Baseball and football player Bo Jackson became the first athlete to be chosen for All Star Games in two sports.

1995 – Queen Elizabeth told Prince Charles and Princess Diana to get a divorce.

1996 – The school board of Oakland, CA, voted to recognize Black English, also known as “ebonics.” The board later reversed its stance.

1998 – After nearly 14 hours of debate, President Bill Clinton was impeached on two charges of perjury and obstruction of justice by the House of Representatives. He became the second President of the U.S. to be impeached.

2001 – The movie “The Fellowship of The Ring” premiered in theaters in the United States. It was based on the first volume of J. R. R. Tolkien’s “The Lord of the Rings”.

2003 – Images for the new design for the Freedom Tower at the World Trade Center site were released. The building sloped into a spire that reached 1,776 feet.

2015 – Michael Jackson’s “Thriller” album became the first to sell more than 30 million copies in the United States. The album was released 33 years earlier.

Look for an Evergreen Day

Tags: A Look Back, Celebrity Birthdays, Days of the Year, December 19, Today in History