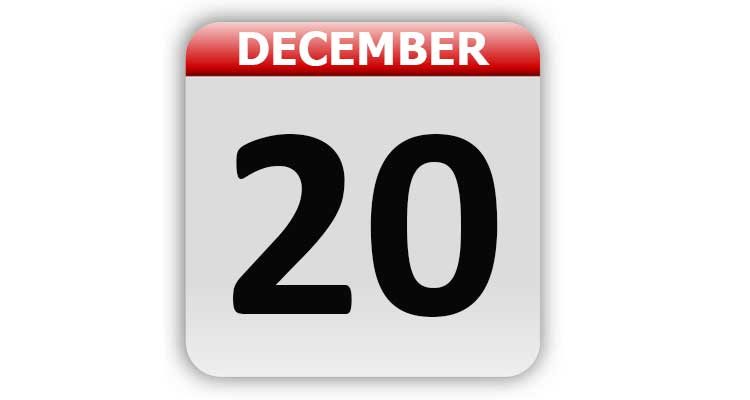 1803 – The United States Senate ratified a treaty that included the Louisiana Territories from France for $15 million. The transfer was completed with formal ceremonies in New Orleans.

1812 – Many of the fairy tales we all learned were first published as “Grimm’s Fairy Tales” in Germany. The first edition included 86 stories. Some of the stories had some pretty dark themes, despite being written for children. Through “Grimm’s Fairy Tales” were introduced to many characters including Snow white, Rapunzel, Rumpelstiltskin, and Hansel and Gretel.

1820 – The state of Missouri enacted legislation to tax bachelors between the ages of 21-50 for being unmarried. The tax was $1 a year.

1860 – South Carolina became the first state to secede from the American Union.

1880 – New York’s Broadway became known as the “Great White Way” when it was lighted by electricity.

1946 – The Frank Capra film. “It’s A Wonderful Life”. had a preview showing for charity at New York City’s Globe Theatre, a day before its “official” world premiere. James Stewart and Donna Reed starred in the film.

1954 – Buick Motor Company signed Jackie Gleason to one of the largest contracts ever entered into with an entertainer. Gleason agreed to produce 78 half-hour shows over a two-year period for $6,142,500.

1957 – The initial production version of the Boeing 707 made it’s first flight.

1962 – The Osmond Brothers appeared on NBC-TV’s “Andy Williams Show” for the first time.

1963 – The Berlin Wall was opened for the first time to West Berliners. It was only for the holiday season. It closed again on January 6, 1964.

1991 – The movie “Father of the Bride”, starring Steve Martin, premiered in theaters.

1996 – NeXT merged with Apple Computer, starting the path to Mac OS X.

1998 – In Houston, TX, a 27-year-old woman gave birth to the only known living set of octuplets. Seven of the eight octuplets are currently alive, one died one week after birth.

1999 – The Vermont Supreme Court ruled that homosexual couples were entitled to the same benefits and protections as wedded couples of the opposite sex.

2007 – Queen Elizabeth II became the oldest monarch of the United Kingdom, surpassing Queen Victoria, who lived for 81 years and 243 days.

Tags: A Look Back, Celebrity Birthdays, Days of the Year, December 20, Today in History