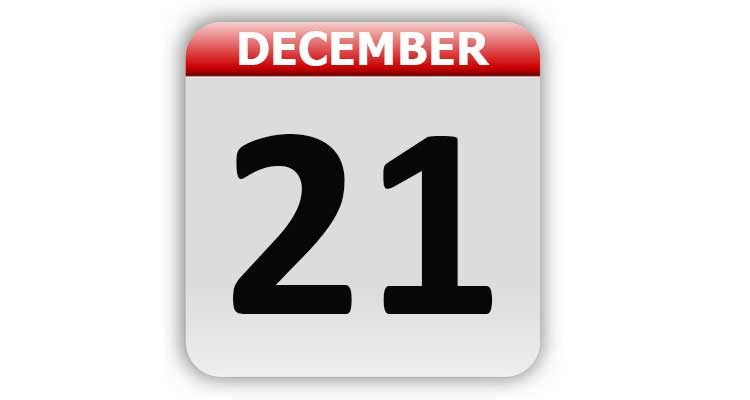 1620 – William Bradford and the Mayflower Pilgrims landed on what is now known as Plymouth Rock in Plymouth, MA.

1891 – The first game of basketball, invented by faculty member James Naismith, was believed to have been played at Springfield College in Massachusetts.

1898 – The radioactive element radium was discovered by scientists Pierre and Marie Curie.

1913 – Arthur Wynne published a new “word-cross” puzzle in the “New York World” in England. The name was later changed to “crossword.”

1937 – Walt Disney debuted the first, full-length, animated feature in Hollywood, CA. The movie was “Snow White and the Seven Dwarfs”.

1944 – Horse racing was banned in the United States until after the end of World War II.

1967 – Louis Washkansky, the first man to undergo a heart transplant, died in Cape Town, South Africa. He lived for 18 days after the transplant.

1968 – Apollo 8 was launched from the Kennedy Space Center on a mission to orbit the moon. It was the first visit to another celestial body by humans. The craft landed safely in the Pacific Ocean on December 27th.

1970 – Elvis Presley went to the White House to volunteer his services to President Richard Nixon in the fight against drugs.

1978 – Police in Des Plaines, IL, arrested John W. Gacy Jr. and began unearthing the remains of 33 men and boys that Gacy was later convicted of having murdered.

1979 – Willie Nelson made his acting debut in “The Electric Horseman”, starring with Robert Redford and Jane Fonda.

1988 – A terrorist bomb went off on Pan Am Flight 103 over Lockerbie, Scotland. All 259 passengers on board, and 11 people on the ground, were killed.

1998 – The first vaccine for Lyme disease was approved.

2001 – Congress passed a $20 billion package to finance the “war against terrorism” being fought in Afghanistan.

2002 – Larry Mayes was released after spending 21 years in prison for a rape that maintained that he never committed. He was the 100th person in the U.S. to be released after DNA tests were performed.

2004 – A suicide bomber killed 22 at the forward operating base next to the main U.S. military airfield at Mosul, Iraq. It was the single deadliest suicide attack on American soldiers.

2012 – The Walt Disney Company completed its acquisition of Lucasfilm and of the “Star Wars” franchise.

2012 – People wondered if the world would end when a Mayan calendar predicted it would happen on this date. It obviously didn’t happen!

2012 – The song “Gangnam Style” became the first video to hit one billion views on YouTube.com.

Look on the Bright Side Day

Tags: A Look Back, Celebrity Birthdays, Days of the Year, December 21, Today in History