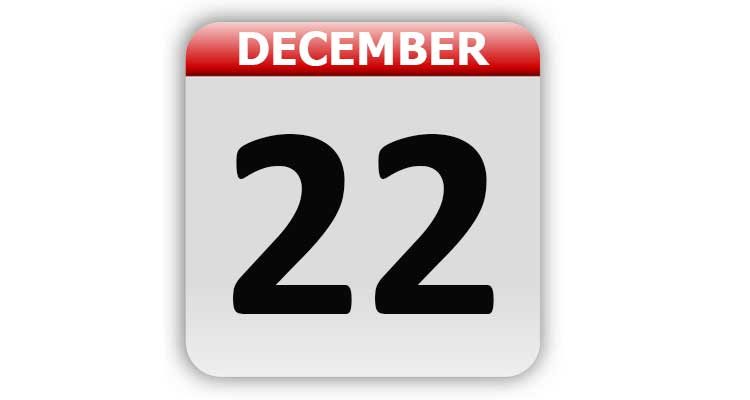 1882 – Edward Johnson was the first person to string light bulbs together to decorate his Christmas tree.

1895 – German physicist Wilhelm Röntgen made the first X-ray. It was an x-ray of his wife’s hand.

1910 – U.S. Postal savings stamps were issued for the first time. They were discontinued in 1914.

1937 – The Lincoln Tunnel opened to traffic in New York, NY.

1939 – Gloria Jacobs became the first girl to hold a world pistol record when she shot 299 out of a possible 300 points. She was 17 years old at the time.

1943 – Sporting goods manufacturers received permission to use synthetic rubber for the core of baseballs.

1956 – Colo, the first gorilla to be born in captivity, was born at the Columbus Zoo and Aquarium in Ohio.

1976 – Isaac Hayes declared bankruptcy, five years after topping the charts and winning both an Oscar and a Grammy for “Theme from Shaft”.

1976 – The last episode of the original “Let’s Make A Deal” TV game show aired. It was hosted by Monty Hall.

1984 – New York City resident Bernhard Goetz shot four black youths on a Manhattan subway. Goetz claimed they were about to rob him. He was later convicted on a charge of illegal weapons possession and spent eight months in prison.

2001 – A terrorist dubbed the “shoe bomber” was foiled in the air. Londoner Richard Reid, 28, was subdued on an American Airlines flight from Paris to Miami as he attempted to detonate an explosive device hidden in his sneaker.

2006 – The movie, “A Night at the Museum”, starring Ben Stiller, premiered in theaters.

2010 – The repeal of the Don’t Ask, Don’t Tell policy. The 17 year old policy banning homosexuals serving openly in the U.S. military was signed into law by President Barack Obama.

2018 – The government was partially shut down after the House and Senate failed to pass a spending bill. President Donald Trump insisted he would not sign any spending bill that did not include $5 billion for a border wall.

Tags: A Look Back, Celebrity Birthdays, Days of the Year, December 22, Today in History