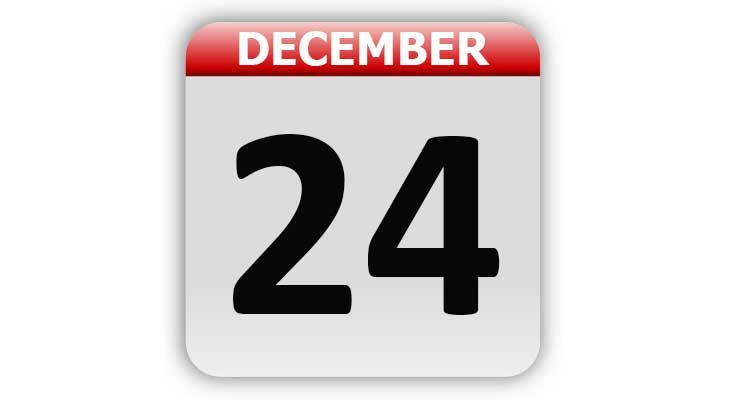 1818 – Franz Gruber of Oberndorf, Germany composed the music for “Silent Night”. The words were written by Josef Mohr.

1851 – A fire devastated the Library of Congress in Washington, DC, destroying about 35,000 volumes.

1906 – Canadian physicist Reginald A. Fessenden became the first person to broadcast a music program over radio, from Brant Rock, MA.

1948 – For the first time ever, a midnight Mass was broadcast on television. It was held at St. Patrick’s Cathedral in New York, NY.

1955 – NORAD tracked Santa for the first time in what would become an annual Christmas Eve tradition.

1968 – Three astronauts, James A. Lovell, William Anders and Frank Borman, reached the moon. They performed 10 lunar orbits and broadcast live TV pictures that became the famous Christmas Eve Broadcast, one of the most watched programs in history. Seven months later man first landed on the moon.

1992 – Mike Espy was nominated to be Secretary of Agriculture by President Bill Clinton. Upon confirmation, he became the first black person to hold the position.

2000 – 36 minutes after the end of a game, both the New England Patriots and the Miami Dolphins were called back to the playing field. The teams had to play the final 3 seconds of the game which the Dolphins had won 27-24. The end result did not change.

2000 – The “Texas 7,” seven convicts that had escaped a Texas prison, robbed a sports store in Irving, TX. The suspects killed Officer Aubrey Hawkins, stole $70,000, 25 weapons and clothing. The men had escaped on December 13.

Tags: A Look Back, Celebrity Birthdays, Days of the Year, December 24, Today in History