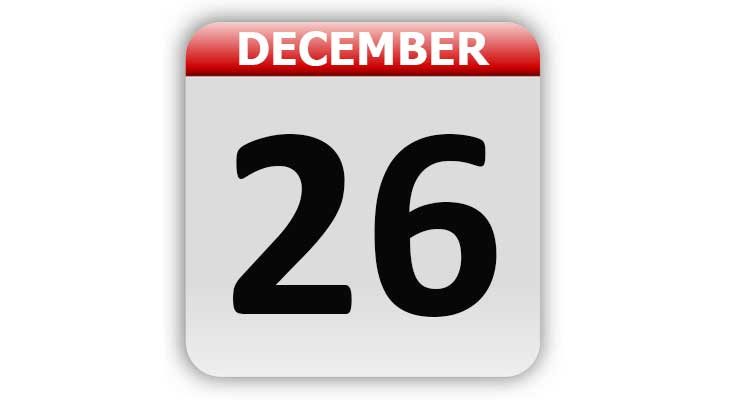 1919 – Babe Ruth, of the Boston Red Sox, was sold to the New York Yankees by owner Harry Frazee, allegedly establishing the Curse of the Bambino superstition.

1933 – The Nissan Motor Company was launched in Tokyo, Japan.

1941 – President Franklin D. Roosevelt signed a bill establishing the fourth Thursday in November as Thanksgiving Day in the United States.

1963 – The Beatles “I Want to Hold Your Hand” and “I Saw Her Standing There” were released in the United States, which marked the beginning of Beatlemania on an international level.

1973 – The movie “The Exorcist”, starring Linda Blair, premiered in theaters.

1982 – The Man of the Year in “TIME” magazine was a computer. It was the first time a non-human received the honors.

1996 – Jon Benet Ramsey was found dead in her Colorado home.

2004 – Under the Indian Ocean, a 9.1-9.3 magnitude earthquake shook northern Sumatra and sent 500 mph waves across the Indian Ocean and Bay of Bengal. The tsunami killed at least 283,000 people in a dozen countries, including Sri Lanka, Indonesia, Sumatra, Thailand and India.

2006 – The 38th President of the United States, Gerald R. Ford, died at age 93 from complications due to pneumonia.

Tags: A Look Back, Celebrity Birthdays, Days of the Year, December 26, Today in History