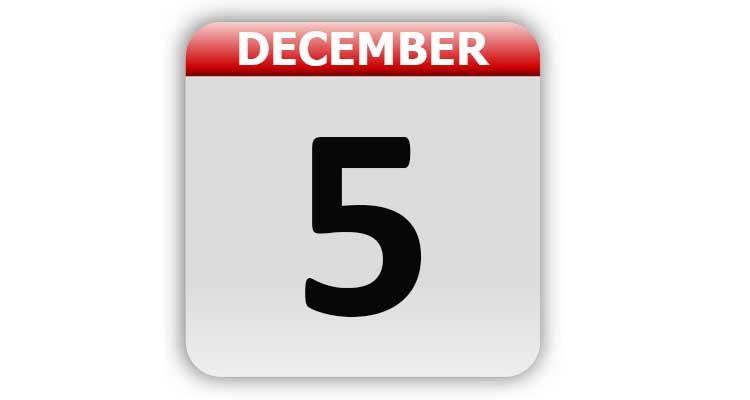 1776 – In Williamsburg, VA, at the College of William and Mary, the first scholastic fraternity in America, Phi Beta Kappa, was organized.

1843 – The first ship to be called U.S.S. Michigan was launched. It served its time on the Great Lakes.

1848 – President James K. Polk triggered the Gold Rush of ’49 by confirming the gold had been discovered in California.

1876 – The first practical pipe wrench, the Stillson wrench, was patented by D.C. Stillson.

1893 – The first electric car was introduced.

1908 – At the University of Pittsburgh, numbers were first used on football uniforms worn by college football players.

1932 – German physicist Albert Einstein was granted a visa making it possible for him to travel to the United States.

1933 – Prohibition came to an end when Utah became the 36th state to ratify the 21st Amendment to the Constitution, thus establishing the required 75% of states needed to enact the amendment.

1935 – The first commercial hydroponics operation was established in Montebello, CA.

1955 – The American Federation of Labor and the Congress of Industrial Organizations merged to form the AFL-CIO.

1962 – The United States and the Soviet Union agreed to cooperate in the peaceful uses of outer space.

1978 – The American space probe Pioneer Venus I, orbiting Venus, began beaming back its first information and picture of the planet.

1988 – Jim Bakker and former aide, Richard Dortch, were indicted by a federal grand jury in North Carolina on fraud and conspiracy charges.

1997 – Matt Damon and Ben Affleck debuted their screenwriting efforts when “Good Will Hunting” opened in theaters.

2008 – O.J. Simpson was sentenced to between 15 and 27 years in prison in a Las Vegas, NV court for kidnapping, armed robbery and 10 other charges.

2008 – The movie “Frost/Nixon” premiered. The film tells the story behind the Frost/Nixon interviews of 1977. The film was directed by Ron Howard.

2010 – Merle Haggard, Paul McCartney and Oprah Winfrey were among those receiving the Kennedy Center Honors in Washington, D.C.

2010 – NASA’s Mars Odyssey spacecraft became the longest-operating spacecraft ever sent to Mars. The Odyssey entered orbit around Mars on October 23, 2001.

2014 – NASA’s Orion Multi-Purpose Crew Vehicle debuted when it was launched for a four hour test flight. It landed on target in the Pacific Ocean.

Tags: A Look Back, Celebrity Birthdays, Days of the Year, December 5, Today in History