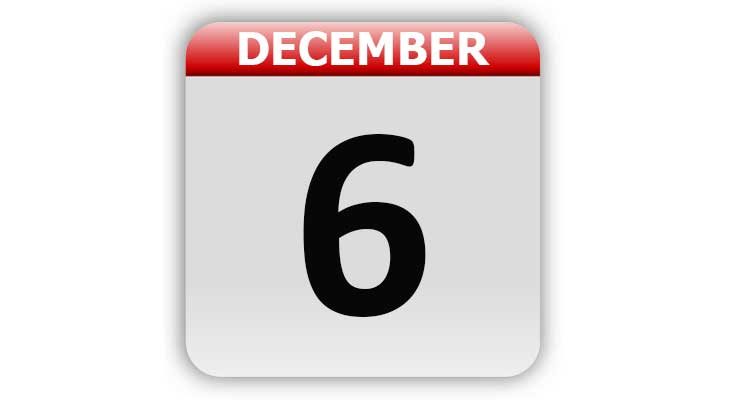 1768 – The first edition of the Encyclopedia Britannica was published.

1849 – Harriet Tubman escaped from slavery in Maryland. She returned to the South 19 times and freed more than 300 slaves.

1865 – The 13th Amendment to the Constitution, abolishing slavery, was ratified.

1877 – Thomas Edison demonstrated the first gramophone, with a recording of himself reciting “Mary Had a Little Lamb” onto a cylinder.

1877 – The first edition of “The Washington Post” was published.

1884 – After 34 years, construction of the Washington Monument was completed by Army engineers.

1923 – President Calvin Coolidge became the first President to have a Presidential address broadcast on radio.

1947 – The Everglades National Park in Florida was dedicated by President Harry S. Truman.

1957 – America’s first attempt at putting a satellite (Vanguard TV3) into orbit failed when the satellite blew up on the launch pad at Cape Canaveral, FL.

1973 – Gerald R. Ford was sworn in as the Vice President of the United States after the resignation of Spiro Agnew, becoming the first non-elected Vice President.

1994 – Orange County, CA, filed for bankruptcy protection due to investment losses of about $2 billion. The county was one of the richest in the United States and became the largest municipality to file for bankruptcy.

1998 – Astronauts aboard the Space Shuttle Endeavour connected the first two building blocks of the International Space Station in the Shuttle cargo bay.

2002 – Winona Ryder was sentenced to 36 months of probation and 480 hours of community service stemming from her conviction for shoplifting from Saks Fifth Avenue. She also had to pay $10,000 in fines and restitution.

National Day of Remembrance and Action on Violence Against Women

Put On Your Own Shoes Day

Tags: A Look Back, Celebrity Birthdays, Days of the Year, December 6, Today in History