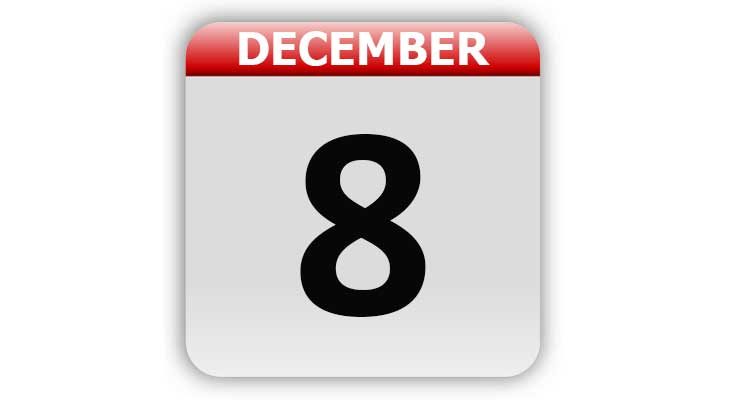 1863 – President Abraham Lincoln announced his plan for the Reconstruction of the South.

1886 – At a convention of union leaders in Columbus, OH, the American Federation of Labor was founded.

1936 – The NAACP filed its first lawsuit in a campaign to equalize the salaries of black and white school teachers.

1941 – President Franklin D. Roosevelt declared December 7 to be “a date which will live in infamy” when the United States entered World War II, declaring war against Japan. The act came one day after the Japanese attacked Pearl Harbor. Britain and Canada also declared war on Japan.

1952 – The television show “I Love Lucy” broke a longstanding television taboo by acknowledging a pregnancy.

1953 – In Grand Rapids, MI, WOOD TV changed from its original Channel 7 to its current Channel 8. It became the first Michigan station to broadcast in color.

1972 – United Airlines Flight 553, a Boeing 737, crashed after aborting its landing attempt at Chicago, IL, Midway International Airport, killing 45. The crash was the first ever loss of a Boeing 737.

1980 – In New York, NY, John Lennon was murdered by Mark David Chapman as he returned home to The Dakota after a recording session at New York’s Record Plant. Earlier in the day, Lennon had autographed an album for Chapman.

1982 – Norman D. Mayer demanding an end to nuclear weapons held the Washington Monument hostage. He threatened to blow it up with explosives he claimed were inside a van. 10 hours later he was shot to death by police.

1998 – The U.S. Supreme Court ruled that police could not search a person, or their cars, after ticketing for a routine traffic violation.

1999 – In Memphis, TN, a jury found that Rev. Martin Luther King Jr. had been the victim of a vast murder conspiracy, not a lone assassin.

2000 – Sting received a star on the Hollywood Walk of Fame.

2000 – Mario Lemieux announced to the Pittsburgh Penguins that he planned to return to the National Hockey League as a player at age 35. He would be the first modern owner-player in U.S. pro sports.

2013 – Metallica became the first band to perform a concert on all seven of Earth’s continents. On this day, Metallica performed at the Argentine Carlini Station in Antarctica.

Matthew Laborteaux – 55 years old (1966) – Actor (Played Albert on TV’s “Little House on the Prairie”) Interesting fact: Labyorteaux is a skilled video game player. In October 1981 he finished in tenth place for “Centipede” at the Atari, Inc. world championships. In April 1982, he became the United States “Pac-Man” champion at a People-sponsored tournament, with a score of 1,200,000.

Pretend to be a Time Traveler Day

Tags: A Look Back, Celebrity Birthdays, Days of the Year, December 8, Today in History