Dick Orkin, whose voice was familiar to many radio listeners, died Sunday in California, at the age of 84.

His daughter, Lisa Orkin, posted the following on Facebook: “He had been struggling with health issues for a while and lately was on the mend, but Saturday night he had a stroke and Sunday evening he passed away. He was an incredible father and we all feel blessed that we had him in our lives as long as we did.” 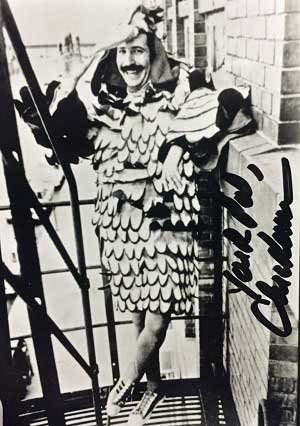 Orkin was production director at WCFL in Chicago, IL back in 1967 when he created “The Adventures of Chickenman”, portraying mild-mannered shoe salesman Benton Harbor who would fight crime as “Chickenman”. “He’s Everywhere. He’s Everywhere!” The series was syndicated to more than 1,500 stations worldwide.

In an interview about the radio series, Orkin recalled, “The origin of Chickenman was the direct result of the popularity of the television show ‘Batman’. It was huge. It was camp. It was fun. We came up with Chickenman. I sort of based the character on the Broderick Crawford sheriff character –- that sort of straight, know it all delivery of his. It seemed like a fun thing to parody. It began with that. I wasn’t thinking about a chicken.”

About ten years ago, I happened to be having a discussion with a local TV broadcaster, who I found out was also a fan of the “Chickenman” series. In fact, he had several reel-to-reel tapes of the original episodes that he had saved from the radio station he had worked at that aired the series. Upon finding out what a fan I was, he gave me his collection of tapes! (I won’t name him here, but he knows who he is!) 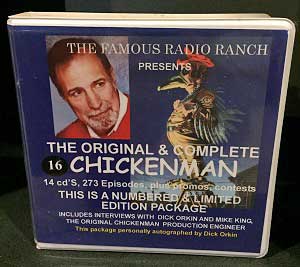 In honor of Dick Orkin’s induction into the National Association of Broadcasters (NAB) Radio Hall of Fame in April 2002, and a Radio Advertising Burean “Lifetime Achievement Award” in June of 2003, there was a special collection of CDs that were offered for sale. Of course I had to order the 14 CD, 273 episode collection. The set includes the original 1966 episodes and the 1973 “Chickenman vs the Earth Polluters” series, along with station promos and two CDs of behind-the-scenes interviews with Orkin and sound engineer Mike King. Oh, by the way, it was a numbered collection (I have #16!) and it came complete with an autographed postcard of Dick as “Chickenman”. (I know I’m a “Chickenman” geek!) 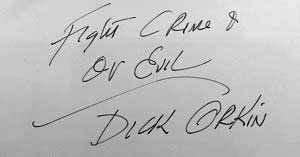 Dick had a big influence on me as far as my radio career. There were many things we did on our morning show that were “theater of the mind”. These were bits that sounded like they were actually occurring, but in fact, it was just radio theater and the listener never really knew that is was just a produced segment with sound effects and other production elements. (One example was the Q-Zoo’s “Catch it and Keep It” segment we used to do at WKLQ back in the early 90’s. We never really threw VCRs, DVD players or TVs out of the 10th floor window for listeners to catch — and keep — on the street below.)

For many years Dick Orkin and his business partner Bert Berdis would do local and national radio commercials. I have in my collection an Eva-Tone soundsheet featuring those two. Eva-Tone soundsheets were square, thin, flexible, vinyl record sheets that were often placed in magazines and such. In September 1979, a soundsheet appeared in an issue of Advertising Age magazine. The front side was a promotion for the company that produced the soundsheet. On the backside was a montage of some of the commercials the Dick and Bert were famous for producing. Here is the audio from the backside of that soundsheet…

To read more about Dick Orkin, here is his Wikipedia page.