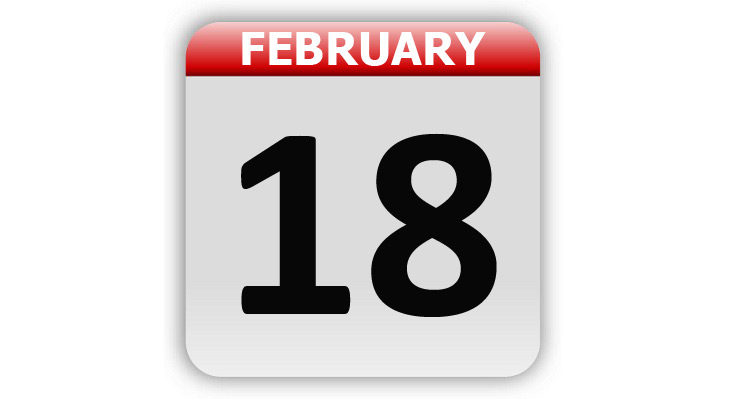 1815 – Mackinac Island returned to United States possession as the Treaty of Ghent went into effect. The treaty marked the official end of the War of 1812.

1841 – The first continuous filibuster in the U.S. Senate began. It lasted until March 11th.

1861 – In Montgomery, AL, Jefferson Davis was inaugurated as the President of the Confederate States.

1885 – Mark Twain’s “Adventures of Huckleberry Finn” was published in the U.S. for the first time.

1929 – The first Academy Awards winners were announced. There was no ceremony, the Oscar winners were revealed in a newsletter.

1930 – Clyde Tombaugh discovered the planet Pluto. The discovery was made as a result of photographs taken in January 1930.

1977 – The Space Shuttle Enterprise went on its maiden “flight” sitting on top of a Boeing 747.

1984 – Reed Larson (of the Detroit Red Wings) got two assists to become the highest scoring, American-born player in the history of the National Hockey League. Larson broke the record by scoring his 432nd point.

1987 – The executives of the Girl Scout movement decided to change the color of the scout uniform from the traditional Girl Scout green to the newer Girl Scout blue.

1989 – The TV show “Saturday Night Live” introduced us to the characters Wayne and Garth with the first of many “Wayne’s World” sketches.

2000 – The U.S. Commerce Department reported a deficit in trade goods and services of $271.3 billion for 1999. It was the largest calendar-year trade gap in U.S. history.

2001 – Seven-time NASCAR Sprint Cup Series champion Dale Earnhardt, Sr., was killed instantly when his #3 car crashed during the final lap of the Daytona 500.

2001 – FBI agent Robert Philip Hanssen was arrested and accused of spying for Russia for more than 15 years. He later pleaded guilty and was sentenced to life in prison without parole.

2007 – WikiLeaks published the first of hundreds of thousands of classified documents disclosed by the soldier now known as Chelsea Manning.

2021 – The Mars rover, Perseverance, landed successfully. The rover was designed to explore Jezero crater as part of NASA’s Mars 2020 mission.

National No One Eats Alone Day

Tags: A Look Back, Celebrity Birthdays, Days of the Year, February 18, Today in History