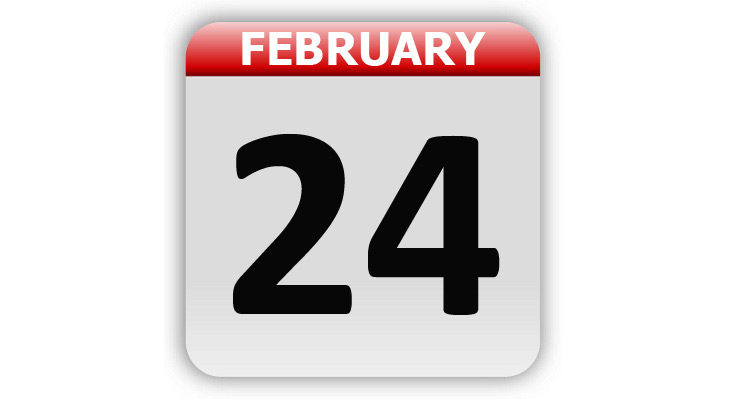 1803 – The U.S. Supreme Court ruled itself to be the final interpreter of all constitutional issues.

1839 – William S. Otis received a patent for the steam shovel.

1857 – The first shipment of perforated postage stamps was received by the U.S. Government.

1866 – In Washington, D.C., an American flag made entirely of American bunting was displayed for the first time.

1868 – Andrew Johnson became the first President of the United States to be impeached by the U.S. House of Representatives. He was impeached due to his attempt to dismiss Secretary of War Edwin M. Stanton. Johnson was later acquitted in the Senate.

1938 – The first nylon bristle toothbrush was made, marking the first time that nylon yarn had been used commercially.

1942 – The U.S. Government stopped shipments of all 12-gauge shotguns for sporting use for the wartime effort.

1976 – The Eagles’ “Greatest Hits” album became the first album in the U.S. to be certified platinum by the RIAA.

1980 – The USA Olympic hockey team completed their “Miracle on Ice” by defeating Finland, 4-2, to win the gold medal.

1983 – The Dow Jones industrial average closed above the 1,100 mark for the first time.

1988 – The U.S. Supreme Court overturned a $200,000 award to Rev. Jerry Falwell that had been won against “Hustler” magazine. The ruling expanded legal protections for parody and satire.

1989 – A United Airlines 747 jet ripped open in flight killing 9 people. The flight was from Honolulu to New Zealand.

1992 – The Postal Service unveiled two versions of its proposed Elvis stamp for fans to vote on. The younger Elvis design won and was issued on January 8, 1993.

1992 – After a furlough to fight anorexia, Tracy Gold returned to the set of TV’s “Growing Pains”.

1997 – Dick Enberg received a star on the Hollywood Walk of Fame.

2011 – The television sitcom “Two and a Half Men” was cancelled for the rest of the season after Charlie Sheen criticized and insulted creator Chuck Lorre in a series of bizarre interviews.

Tags: A Look Back, Celebrity Birthdays, Days of the Year, February 24, Today in History