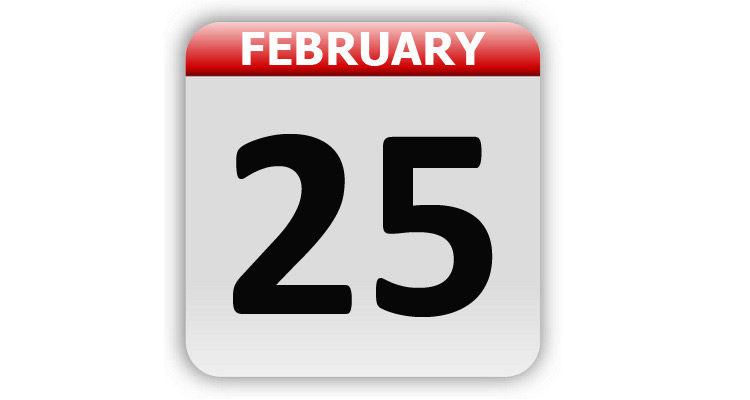 1791 – First Bank of the United States was chartered by Congress and signed by President George Washington.

1793 – The department heads of the U.S. government met with President George Washington for the first Cabinet meeting.

1913 – The 16th Amendment to the U.S. Constitution was ratified. It authorized a graduated income tax.

1919 – The state of Oregon placed a one cent per gallon tax on gasoline, becoming the first state to levy a gasoline tax.

1940 – The first hockey game to be televised in the United States was between the New York Rangers and the Montreal Canadiens. The game aired on W2WBS in New York, NY, with one camera in a fixed position. The Rangers beat the Canadiens 6-2.

1943 – This day was commonly thought to be George Harrison’s birthday. In 1992, Harrison was reported to have said, “I only learned recently after all these years that the date and time of my own birth have always been off by one calendar day and about a half hour on the clock.” His birthday is actually February 24.

1964 – In Miami, Cassius Clay (who later changed his name to Muhammad Ali) defeated Sonny Liston (on a TKO) for the world heavyweight
boxing championship.

1989 – The NFL’s Dallas Cowboys fired Tom Landry, the only head coach the team had since its inception in 1960.

2005 – Dennis Rader was arrested for the BTK serial killings in Wichita, KS. He later pleaded guilty and was sentenced to 10 life prison terms.

2010 – Apple announced that it had surpassed 10 billion song downloads from the iTunes Store. The 10 billionth song was “Guess Things Happen That Way” by Johnny Cash.

Tags: A Look Back, Celebrity Birthdays, Days of the Year, February 25, Today in History