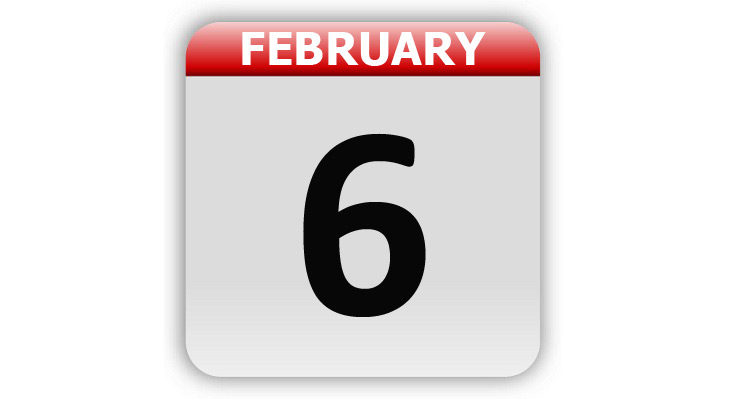 1788 – Massachusetts became the sixth state to ratify the U.S. Constitution.

1911 – The first old-age home for pioneers opened in Prescott, AZ.

1926 – The National Football League adopted a rule that made players ineligible for competition until their college class graduated.

1933 – The 20th Amendment to the Constitution went into effect to move the start of Presidential, Vice-Presidential and Congressional terms from March to January.

1959 – Jack Kilby of Texas Instruments filed the first patent for an integrated circuit.

1971 – NASA Astronaut Alan B. Shepard used a six-iron, that he had brought on the flight, and swung at three golf balls on the surface of the Moon.

1973 – Construction began on the CN Tower in Toronto, Ontario, Canada.

1985 – The French mineral water company, Perrier, debuted its first new product in 123 years — water with a twist of lemon, lime or orange.

1986 – Bette Midler received a star on The Hollywood Walk of Fame.

1987 – Sonny Bono entered politics when he declared his candidacy for mayor of Palm Springs, CA, a race he went on to win.

1988 – Michael Jordan made his signature slam dunk from the free throw line, inspiring Air Jordan and the Jumpman logo.

1990 – Billy Idol broke several bones in a serious motorcycle accident after finishing an album called “Charmed Life”. Because of his injuries, he was forced to bow out of a major role in Oliver Stone’s “Doors” movie.

2000 – First Lady Hillary Rodham Clinton formally declared her candidacy for a Senator seat in the state of New York.

2002 – A federal judge ordered John Walker Lindh to be held without bail pending trial. Lindh was known as the “American Taliban.”

Tags: A Look Back, Celebrity Birthdays, Days of the Year, February 6, Today in History