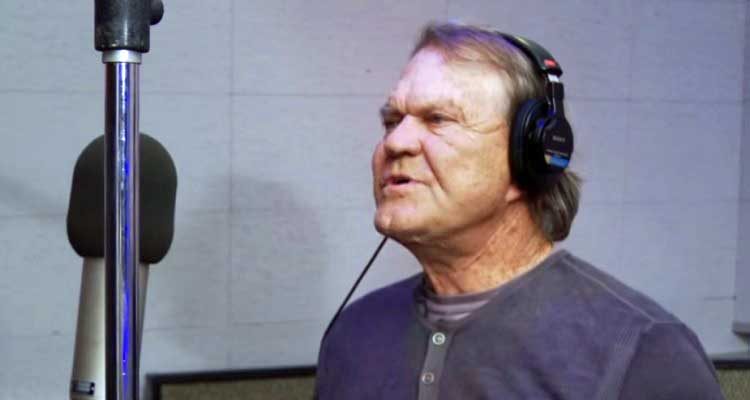 Legendary country music singer Glen Campbell passed away on Tuesday, August 8th, 2017 after a long battle with Alzheimer’s. He was 81. Campbell died around 10 am on Tuesday at a facility for Alzheimer’s patients in Nashville, TN.

Campbell released more than 70 albums over his 50-year career. His hits included: “Rhinestone Cowboy”, “Southern Nights”, “Gentle on My Mind”, “Wichita Lineman”, “Galveston”, and “Country Boy”. He sold 45 million records and had numerous hits on both the pop and country music charts. Campbell was inducted into the Country Music Hall of Fame in 2005.

Before his own recording career, he was a session musician who played with artists like Frank Sinatra, Dean Martin, Nat King Cole, Elvis Presley, Rick Nelson and groups like the Beach Boys and the Mamas and the Papas.

Campbell was also an actor — starring in “True Grit” with John Wayne — and TV host. He has his own show called “The Glen Campbell Goodtime Hour” on CBS from 1969-1972.

Mr. Campbell revealed that he had Alzheimer’s in June 2011, six months after his original diagnosis. At that time, he said that he was going ahead with a farewell tour later that year in support of his new album, “Ghost on the Canvas”. The announcement of his condition was made public because he and his wife, Kimberly, want his fans to be aware of his condition if he appeared disoriented on stage. The five-week tour turned into 151 shows over 15 months. His last performance was in Napa, CA, on November 30th, 2012.

Campbell’s final studio album, “Adiós,” was released in June. The album included guest appearances by Willie Nelson, Vince Gill and three of Campbell’s children. It had been recorded after the farewell tour.

In 2014, he starred in the documentary “I’ll Be Me”, which followed him on his farewell tour and the struggle with his Alzheimer’s diagnosis. The song “I’m Not Gonna Miss You” was written for that documentary. It was recorded by Campbell after the farewell tour, and would be the last recording he ever did. The lyrics came from something Campbell had said after his diagnosis: “I don’t know what everybody’s worried about. It’s not like I’m going to miss anyone, anyway.”

He is survived by his wife, Kim, and eight children.

To read more about Glen Campbell, here is his Wikipedia page.

Here is the video for the song “I’m Not Gonna Miss You”. For anyone who has had a relative that has dealt with Alzheimer’s, the song will have a special meaning. (Grab the tissues)

In 1979, Campbell released his song “Southern Nights”. On the flip side of that 45 (that I have in my collection) was his rendition of the “William Tell Overture” (many remember it as the theme to the “Lone Ranger”). I always thought the “William Tell Overture” should have been the “A” side of that 45, and not the “B” side.  It was phenomenal!! I was amazed at his ability to move his fingers around on the strings of the guitar. Here is a video of him doing that song on stage…

And here is a great story on Glen Campbell from CBS News Sunday Morning from February 12th, 2012…